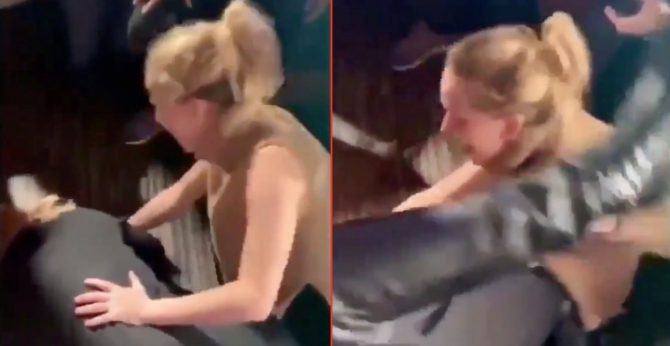 So Jennifer Lawrence and Adele walk into a gay bar…

We forgot the punchline to this one, but it involves rolling around on an almost certainly sticky floor.

That was the unexpected scene at Pieces in New York City’s Greenwich Village on Friday, as the famed performers popped in to have some drinks and a good time. You know, just like regular people.

The crowd, naturally, was excited to see the pair cutting loose. At one point they even hopped up on stage and participated in a drinking contest. For those keeping score, Lawrence easily won.

And Adele didn’t take to losing well–we can see how that might happen when you’ve accrued fifteen Grammy awards. But Lawrence has three Oscars. You do that math.

“You’re f***ing engaged. You’re not even relevant to be here!” Adele screamed.

At some point, this led to them rolling around on the floor:

Jennifer Lawrence literally got Adele down to the floor for losing at a musical shot game ? pic.twitter.com/TuhLQbdurF

And here’s the “Someone Like You” singer on stage:

Adele at a gay bar having the best time ugh my hearttt ? pic.twitter.com/bohsPoGD1v