Out-gay director Nisha Ganatra, hereto known for directing episodes of Transparent and Girls, tries her craft at a feature, starring no less than Mindy Kaling and Emma Thompson. Late Night feels a bit like The Devil Wears Prada set in a TV studio. Thompson plays the frigid bitch of a boss, while Kaling the plucky young writer hired to revitalize Thompson’s flailing late night talk show. The film played Sundance earlier this year where Amazon paid the highest price in the festival history ($13 million) for distribution rights. That alone will pique curiosity; that the film is also very fun should attract a few viewers.

The Catch: Werq the World

WOW Presents Plus, the new subscription streaming service from World of Wonder, the production company behind RuPaul’s Drag Race launched this new series. Werq the World follows Drag Race alums like Valentina, Alyssa Edwards and Bob the Drag Queen as they prepare for the Werq the World Tour, a touring drag show that travels all over the world, with each episode focusing on a different performer. A fine mix of hilarity and touching honesty, the show is a must for fans of Drag Race.

Streams on WOW Presents Plus, with new episodes every Thursday.

We’ve covered the new documentary 5B since before the film even had distribution. Now the outstanding documentary from directors Paul Haggis and Dan Krauss comes to theatres, and just in time for Pride Month. 5B recounts the story of the world’s first AIDS ward as told by the doctors and nurses who worked there. The movie goes far beyond the usual elegy surrounding the AIDS crisis to a much darker place, laying bare the government inaction which exacerbated the plague, the doctors who refused to treat gay patients and the moral questions surrounding both. Both devastating and uplifting, it’s a must-see.

The Stream: Everything is Free

Brian Jordan Alvarez returns to web content with this new comedy, in which he stars and also wrote & directed. Alvarez reunites his usual stock company from previous outings like Grandmother’s Gold and The Gay and Wonderous Life of Caleb Gallo for a story about Ivan, an artist who receives a visit from a college friend…and his younger brother, who takes an immediate interest in Ivan. Sexually frank (Alvarez goes full-frontal) and thoughtful, Everything is Free proves Alvarez knows what he’s doing behind the camera as much as in front of it.

Acclaimed playwright Del Shores (Sordid Lives) returns with this comedy about growing up gay and Christian in the south. Originally a stage play, a filmed version featuring Leslie Jordan (Will & Grace), William Beli (RuPaul’s Drag Race), Matthew Scott Montgomery (Jane the Virgin) and Dale Dickey (Winter’s Bone). Teeming with rage disguised as savage humor, the play provides Belli with an opportunity to prove himself an effective dramatic actor (in and out of drag). Even better, Dickey and Jordan manage to come off hilariously funny and devastatingly tragic as an aging alcoholic woman and her cranky old queen bestie.

Much in the same trend that brought survivalist horror gems like Bird Box, Starfish follows a woman named Aubrey (played by Virginia Gardner, of Halloween) as she tries to evade an alien invasion which has wiped out most of humanity. When Aubrey discovers a sound which could defeat the aliens, she must scavenge her way through a small town looking for other hidden tapes to build the weapon. Entertaining for its suspense, sci-fi and horror elements, as well as for its quiet observations about loneliness and isolation, Starfish will keep viewers who love a thrill quite engaged. Moreover, Gardner gives a terrific performance as a woman teetering between optimism and insanity.

Fred Armisen of SNL co-created this new HBO series which plays a bit like a contemporary version of The Addams Family. Los Espookys focuses on a group of goth 20 and 30-somethings who enjoy all things macabre–and scaring the daylights out of people. Led by the blue-haired, very cute—and very gay—Juan Carlos (played by stand up comic Julio Torres), Los Espookies set up shop to run a business to scare for a fee. Told in both English & Spanish, Los Espookys has a very odd sense of humor about it, though Torres performance makes the show worth a look.

The Sip: The Alyssa Edwards 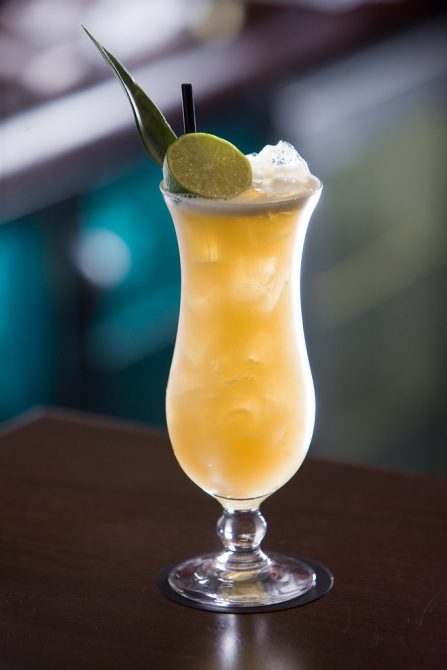 We happened to stumble on this cocktail which takes its namesake from the Drag Race and Werq the World, and given that it’s Pride Month, what better time to enjoy it?

Mix rum over ice in a tall glass. Add a splash of pineapple juice. Top off with Red Bull.