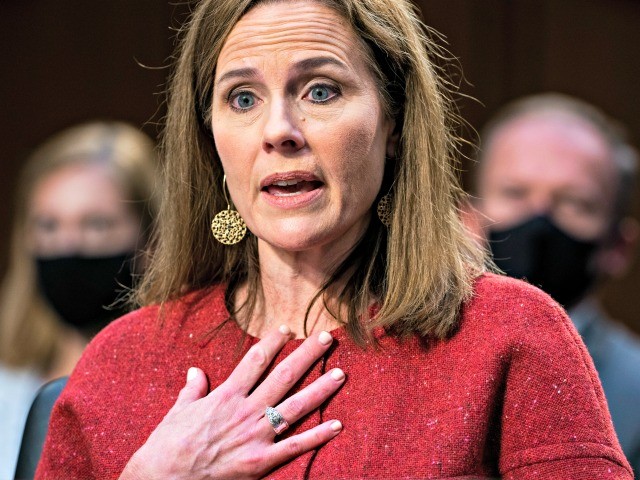 During her confirmation hearing yesterday, SCOTUS nominee Amy Coney Barrett implied that being gay is a choice when she repeatedly used the antiquated term “sexual preference” to dodge questions about marriage equality.

An outrage quickly ensued, and later in the day, Sen. Mazie Hirono of Hawaii schooled the judge for her poor choice of words.

“Even though you did not give a direct answer, I think your response did speak volumes,” Hirono said. “Not once but twice you used the term ‘sexual preference’ to describe those in the LGBTQ community.”

Oh, but she did not stop there.

The senator from Hawaii continued, “That ‘sexual orientation is both a normal expression of human sexuality and immutable’ was a key part of the majority’s opinion in Obergefell. Which, by the way, Scalia did not agree with. So if it is your view that sexual orientation is merely a ‘preference,’ then the LGBT community should be rightly concerned whether you would uphold their constitutional right to marry.”

Hirono went on to say that she did not believe Barrett’s casual use of the term “sexual preference” was an accident.

“I don’t think that you used the term ‘sexual preference’ as, I don’t think it was an accident,” she added. “And one of the legacies of Justice Scalia and his particular brand of originalism is a resistance to recognizing those in the LGBT community as having equal rights under our Constitution.”

Let me make clear – sexual preference is an offensive and outdated term.

To suggest sexual orientation is a choice? It's not. It's a key part of a person's identity.

The LGBTQ+ community should be concerned with #WhatsAtStake with Judge Barrett on the Supreme Court. pic.twitter.com/4TWyATMX0Y

After being properly scolded, Barrett issued a half-hearted apology, saying, “I certainly didn’t mean and would never mean to use a term that would cause any offense to the LGBTQ community. So, if I did, I greatly apologize for that. I simply meant to be referring to Obergefell’s ruling with respect to same-sex marriage.”

Meanwhile, Twitter had a lot to say about the matter…

Amy Coney Barrett apologized for using the term “sexual preference” which no one really has used since the 1980s. It’s like if she’d said “colored people” then offered her sincere apology.

Yes, you should be sorry, Judge Barrett. And yes, a SCOTUS nominee should know better.

1. It’s referring to homosexuality and bisexual as a choice.

And she’ll keep doing this. Watch.

My sexual preference is not to have Amy Coney Barrett decide my rights.

Amy Coney Barrett referred to being gay as a sexual “preference.”

This is code language used to strip LGBT people of their rights.

No gay person says “I think I prefer to be gay,” in the same way they choose between a chocolate chip and peanut butter cookie.

The term “sexual preference” is typically used to suggest that being lesbian, gay or bisexual is a choice and therefore can and should be “cured.” Sexual orientation is the accurate description of an individual’s enduring physical, romantic and/or emotional attraction to members of the same and/or opposite sex and is inclusive of lesbians, gay men, bisexuals, as well as straight men and women.

Related: Gay Twitter tears into Amy Coney Barrett after she implies being gay is a choice