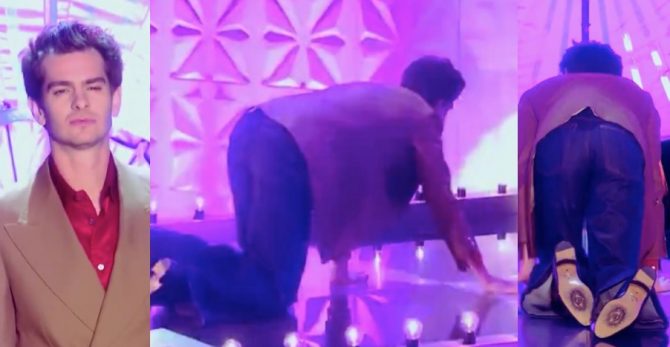 Like Ru says, if you’re not watching BBC Three exclusive behind-the-scene clips from Drag Race UK, you’re only getting half the picture. Or something.

And in this particular clip that never made its way to the final cut of the episode, British actor Andrew Garfield works his way down the catwalk becoming the embodiment of a kitty girl. Michelle Visage approves.

Fans had already praised Garfield as the “best judge in reality TV ever,” which is quite the endorsement.

“Omg I love him,” another happy viewer noted, adding: “As long as I have a face, he will always have a place to sit.” Well then.

Needless to say, the same superfans have been gushing over the newly released clip.

“I don’t think I’ll ever watch anything else ever again,” wrote one, and we hope they stick to that.

I never thought I would see Andrew Garfield crawl down the #DragRaceUK runway, and now I have. pic.twitter.com/BHeHYAOzcz