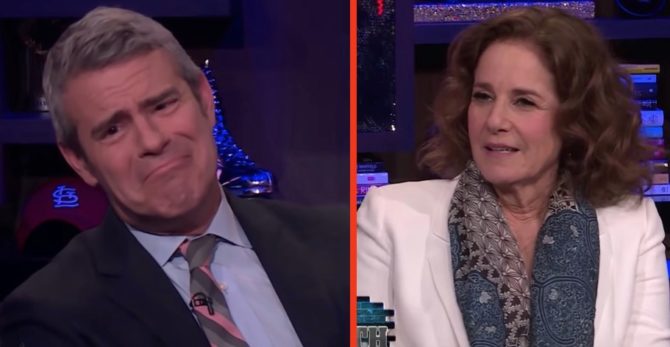 Let it be known: Andy Cohen is not an actor.

Winger stopped by Watch What Happens Live where Cohen had her play a game he calls “Plead the Fifth.” In the clip, Cohen explains he’ll ask three potentially embarrassing questions, and she can opt out of answering only one of them.

Winger clearly isn’t amused by the premise, and it only gets more awkward as Cohen asks some trademark gossipy questions of the acclaimed performer, who just isn’t having it. Did she know what show she signed up for?

After getting a pretty big fact wrong about Winger’s past, Cohen wraps up by asking her to rank her onscreen kisses with famous actors.

“So you remember somebody you kissed 30 years ago?” she asks the host. “You don’t think that you sort of are busy investigating a character, which puts you in another self state? Right now it’s pretty hard to be authentically a person.”

“I’m not an actor so I actually don’t know,” replies Cohen, trying to cut through the palpable tension in the room.

After the segment, Cohen shared on his Instagram story that “Tonight’s show was rough. The team and I are having a cocktail to hash it out. I earned a drink tonight.”