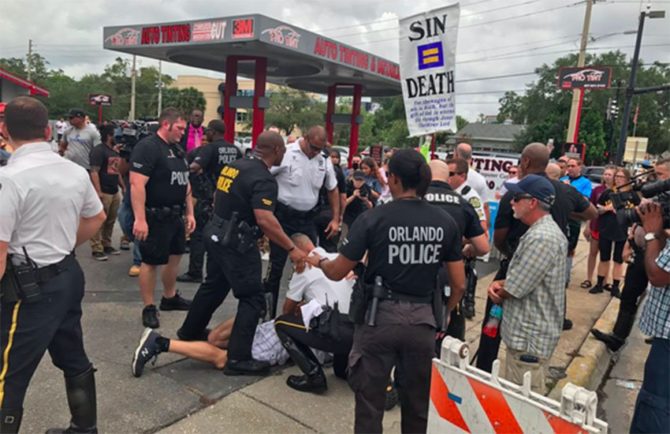 Yesterday marked the one year anniversary since the Pulse Massacre in Orlando, where 49 LGBTQ people and allies were murdered by a crazed gunman.

As mourners gathered to commemorate the anniversary with prayer services, a memorial concert, and a vigil, a gaggle of antigay protestors showed up with signs that said things like “Warning: All homos will burn like faggots in hell” and “Sin = Death.”

They then proceeded to shout hateful religious rhetoric at the crowd, which included many friends and family members of the victims.

Things quickly escalated and police intervened. One of the protestors, a particularly unruly middle-aged white man, was tackled to the ground, handcuffed, and placed in the back of a cop car.

BREAKING: One protester handcuffed after showing up at #pulse. People attending ceremony cheer as he is placed in opd car. @WESH pic.twitter.com/cTrcMRlRLV

Videos posted to social media videos show the crowd cheering as the guy struggles with police.

Police have yet to say why they arrested the man.

At the scene, Orlando Mayor Buddy Dyer said: “We are not here to relive the horror of that day.”