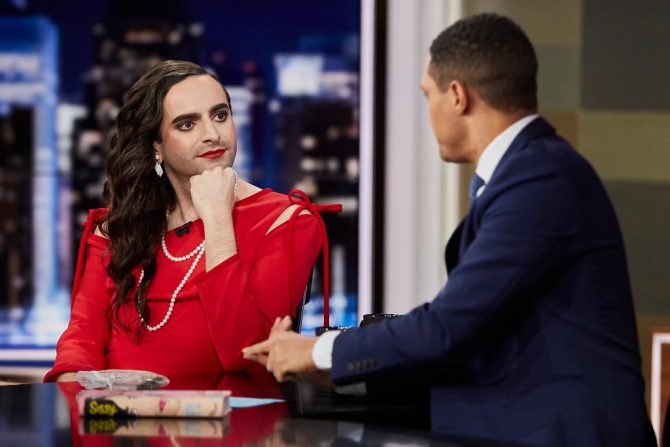 Author and activist Jacob Tobia stopped by The Daily Show Thursday to promote their new memoir and ended up getting Trevor Noah to unleash his inner glam in some dangly earrings.

Tobia, who is vocal about being gender nonconforming, says their book, Sissy: A Coming of Gender Story, is in part intended to take back the historically pejorative term ‘sissy’ and wear it as a badge of honor.

They explain it’s “about reclaiming my childhood for myself and learning to snatch back the power from people who say ‘oh you shouldn’t be like that.’ So if you think you’re going to tease me with that name, it’s the title of my damn book now, sorry!”

Noah points out that for much of the straight world (and we’d add much of the gay world as well) who’ve been conditioned to understand gender as a two-sided coin, talking about trans and nonbinary issues can be a struggle. For many, the challenges of lacking a vocabulary or frame of reference around gender only feel compounded by the feeling that saying “the wrong thing” will result in being shut down.

Tobia suggests we could all benefit from being a bit more “chill” when it comes to gender, but ultimately wants to see everyone free to be as expressive as their hearts desire.

“I want to live in a world where there’s no patriarchy, no misogyny, none of the things that make gender suck,” they say. “I want it to be what makes gender great. I want it to be like a dress-up bin.”

Watch the interview below, which ends in Noah playing a little dress-up of his own: