The Awards Remake: West Side Story

The much-delayed, much-anticipated, Steven Spielberg-directed remake of the musical classic arrives this week reinforcing, if nothing else, the notion of Rita Moreno as a national treasure.

For anyone unfamiliar with the original stage show or the 1961 classic film adaptation directed by Robert Wise & Jerome Robbins, the story follows two rival gangs in 1950s New York: the all-white Jets and the Puerto Rican Sharks. Amid rising tensions between the gangs, Tony (Ansel Elgort), a Jet and Maria (Rachel Zegler), the sister of a Shark, fall instantly in love. The two must conceal their love as they try to prevent a deadly gang rumble, before tragedy consumes their lives.

Screenwriter Tony Kushner (the genius behind Angels in America) reorders the songs and restructures the story to bring a hereto-unseen level of depth to the young characters here. He and Spielberg also deploy a secret weapon: Rita Moreno, who won an Oscar for her performance in the OG West Side returns here in the pivotal role of Valentina, a local shopkeeper and mentor to the Sharks & Jets. Moreno happens to turn 90 one day after the premiere, and if nothing else, she can now boast that she’s the absolute best thing about two versions of the same movie. Broadway starlet Ariana DeBose shines in the role of Anita, the sultry girlfriend of a Shark. The hunky Elgort channels a young Marlon Brando in the lead, and reveals a hereto-unknown choir boy voice. The addition of a trans character–an extension of something from the original show–is downright awesome.

West Side Story will entertain most audiences—especially those gay boys that grew up loving musical theater (you know who you are). And anyone who sees the movie will understand the very real prospect that Moreno could win a second Oscar for her work here.

The Awards Throwback: Being the Ricardos

While we’re on the subject of screen legends, writer/director Aaron Sorkin revisits a pair of screen legends in Being the Ricardos, a semi-biopic that recounts a week in the life of TV legends Lucille Ball (Nicole Kidman) and Desi Arnaz (Javier Bardem). In 1953, production on I Love Lucy gets upended when reports that Ball was a secret communist begin to circulate. Complicating matters: Ball announces she’s pregnant, and she & Arnaz demand that the show also portrays her character as expecting. Hey, in 1953, these were major scandals. The film also delves into the complicated and often explosive relationship between Lucy and Desi, as well as Ball’s own demanding comedy genius.

Industry insiders often cite Sorkin as the greatest screenwriter of our time. We can’t go that far, though we admit, with a resume that includes A Few Good Men, The American President and The Social Network, he has a Hell of a good thing going. Being the Ricardos also ranks among his best scripts, with its astute, nuanced portraits of legendary stars, early TV politics and gender dynamics of the 1950s. Kidman gets a chance to show off her own physical comedy skills in several recreations of iconic Lucy moments, while she brings intelligence and no-nonsense perfectionism to Ball’s off-screen persona. In a similar way, Bardem plays Desi as a shrewd businessman of endless charm. His Desi is also totally in love with Lucy…even if he rebels against her overbearing need for control, and has no problem lying about his own philandering. JK Simmons also gives a standout performance as William Frawley, the drunkard famous for playing Fred Mertz. Funny, fascinating, and with performers relishing Sorkin’s crackling dialogue, Being the Ricardos will be another sure-bet Oscar contender. Watch it and see why.

Experimental director Sean Baker—the mind behind Tangerine—returns with his latest ultra-low budget, ultra-awesome exercise in do-it-yourself filmmaking. Red Rocket tells the story of Mikey Saber (Simon Rex), a broke adult film star now well into his late 40s. Out of work and homeless, he returns to a small Texas town to beg his estranged wife and former porn collaborator Lexi (Bree Elrod) for a place to stay. She and her meth-addict mom (Brenda Deiss) begrudgingly agree. Mikey begins dealing marijuana to earn cash and get on his feet, and he and Lexi begin to repair their relationship. Then Mikey meets Strawberry (Suzanna Son), a beautiful, barely-legal exhibitionist. Strawberry becomes immediately smitten with Mikey, while Mikey sees a chance for a comeback in the adult world.

Much like Tangerine, Red Rocket features some very big laughs mixed in with some moments of touching human drama. Oftentimes, we had the impulse to laugh and wince at the same time. As a character, Mikey has an irresistible charm and unyielding optimism to him—one so strong we can almost overlook just how big a loser he really is…or that he’s near sociopathic in his selfish pursuits. Rex, a performer whose own past dabbling in adult film has held back his career, dives into the role with fierce energy. He knows this is a role of a lifetime, and doesn’t waste a second of his screentime. The movie also features Rex running full-frontal naked through town (with the help of a prosthesis, natch)…so, there’s that.

With Red Rocket, Baker again reminds us why he’s one of the most interesting filmmakers working today. This is a unique movie: one that revels in its own low budget, even as Baker & his cast seem to intimate we’re making a movie, isn’t that so cool?

Why yes, yes it is. And it’s a load of wild fun to watch.

The Behind the Scenes: Street Gang

We’ve been looking forward to this new Sesame Street doc since it debuted at Sundance. Now that we’ve seen it, we can say it doesn’t disappoint. Street Gang chronicles the development of the iconic TV series as a means of educating young children—particularly those living in the inner-city—basic skills, often with the help of ironic celebrities. Archive footage of performances by Johnny Cash, Jessie Jackson, Grace Slick and Paul Simon all turn up. Interviews with original cast members also offer context as to the day-to-day life on the set, and the odd brand of celebrity it brought them.

Of course, Street Gang also details the involvement of the Muppets as led by creator Jim Henson, and how the inclusion of said puppets helped make the show a smash with viewers of all ages. As it turns out Sesame Street also hit it big with college students when it debuted. The movie also shows some rare Muppet outtakes, which alone would be worth the price of rental…including one scene that suggests even if Henson and Frank Oz didn’t conceive Bert & Ernie as a gay couple the thought at least did occur to them pretty early on. Funny, insightful and quite touching, it’s a must for anyone that can still remember any of those old Sesame Street songs. We know that’s most of you.

Season 2 of this low-budget but very funny web series debuts this week. Functional follows a pair of queer besties, Guillermo and Jazmyne (creator Daniel Luna and Lys Perez), as they do their best to get their lives on track. Jazmyne, however, has a penchant for falling for unavailable women, and letting her desires upend her life as a college student. Guillermo might have a teeny drinking problem, which explains his knack for making bad choices on dating apps.

Told in English and Spanish, Functional looks at gay life through a Latino lens, and vice versa. Perez and Luna have a natural chemistry together, and despite the series’ obvious budget limits, the pair manage to generate some real laughter and energy. One rapid-fire recap of some of Guillermo’s Grindr hook-ups gets some very big laughs in the second episode. Made with obvious enthusiasm, we recommend it for the passion of Luna and Perez, as well as for the show’s unexpected thoughtfulness in later episodes. 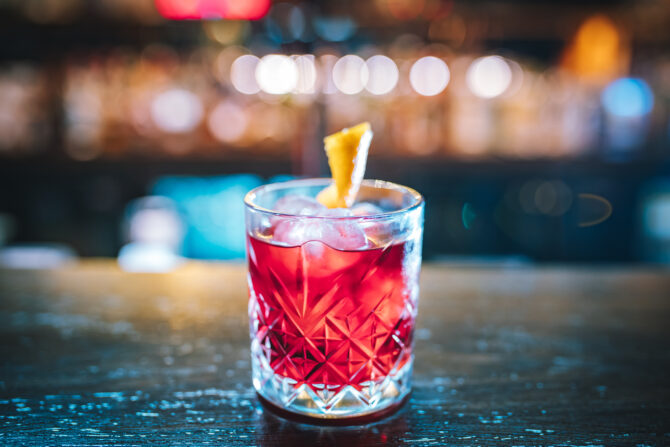 In honor of the release of Red Rocket, we suggest this also-named fruity cocktail for sipping along with this week’s selections. Though it may involve a trip to the liquor store, we think it’ll have you ready for a laugh, a sigh, or a sing-along.

Mix ingredients over ice in a cocktail shaker. Shake well and serve.