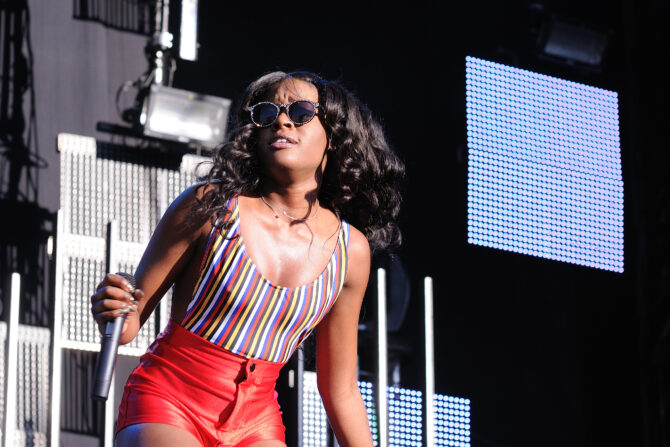 Azealia Banks has regularly found herself in hot water for attacking the queer and trans communities, but she still maintains a large base of LGBTQ fans. However, she might have lost a few after a disastrous appearance at Miami’s Wynwood Pride over the weekend.

Banks cut her performance short early Saturday morning after a turbulent set, storming off the stage after only four songs to the sound of a booing audience.

The rapper was billed as the headliner on night one of the two-night festival, and was scheduled to perform at 1 a.m.

According to several audience members, Banks finally arrived two hours late. After a couple of songs, she started to complain about the event.

She eventually threw her microphone at the audience, flipped off the crowd, and left the stage.

A video of the dramatic exit soon found its way to Twitter.

Hours later, Banks took to social media to explain why she “had to bounce.”

“Wynwood Pride was way too ghetto,” she said, adding that she’s “extremely allergic” to dry ice and “photos will show massive clouds of dry ice which began to make me lightheaded to a point I could barely stand.”

She also complained that “a phone was thrown on stage — proof the festival could not afford licensed security, ancient equipment — and a pig in the front… had the audacity to spit water from his hpv lesion infested mouth.”

Reaction to the event was mixed. Many wondered why she’d been booked for a Pride event in the first place:

Azealia Banks being invited to a Pride event is the epitome of how commercially shitty and disconnected from reality corporate gay culture has become. Like how the fuck are you going to dismiss her horribly transphobic and homophobic (among so much more) shit?

azealia banks is the last person you want at an LGBTQ+ event. js

Others felt it was the audience members who showed bad form:

first off azealia banks being late to a pride event, thats so on brand for her. but also i think the way the audience (esp gay men) shouting calling her a “bitch” and throwing shit/spitting water at her is VILE. and not enough ppl are clocking that. this isn’t normal behavior. https://t.co/lWvn9AklO6

no matter who’s performing, it’s disgusting to throw water and shout misogynistic slurs. and i firmly believe black women have a seat at pride no matter what. its clear that she was disrespected by a majority of the audience. i would storm off pissed too