The Step Out: Pain & Glory

Out director Pedro Almodovar returns with one of his most personal films to date. Pain & Glory won rave reviews earlier this season on the festival circuit, and with good reason. The film tells the story of a middle-aged director trying to reconcile his earlier, outrageous films with his latter-day comfort…and creative drought. Worried that perhaps he doesn’t feel enough emotional pain, he begins using heroin to try and tap into creative inspiration. Not quite as heavy as it sounds, Pain & Glory finds Almodovar in top, if subdued, form, and features a fine performance from Pedro-regular Penelope Cruz, and some excellent work from longtime collaborator Antonio Banderas, who just gets more attractive with age.

Netflix just released a new documentary series that follows several undocumented immigrants trying to apply for citizenship while keeping their families together. Living Undocumented shines a harsh light on US immigration policy and its failings, which go far beyond a single political party’s ideology, and which Trump has exacerbated. That includes the perils of an adorable, married gay couple, one of whom is never eligible for citizenship (he lacks proper documentation from when he emigrated), despite his marital status. Living Undocumented reminds viewers of a humanitarian crisis within the United States itself: one which has not just racial and classist undertones, but one which also has some nasty homophobic thorns.

The popular update of the classic Archie comic book characters returns to The CW this week. Season 3 of the show finds Archie & the gang recovering from the poisonous affair of the Gargoyle King and sets up the season-long mystery about why we last saw them covered in blood and burning Jughead’s beanie. The season also sees the return of Molly Ringwald as Archie’s mom in a major role, and the residents of Riverdale reeling from the death of Fred Andrews. It’s a meta-memorial for the late Luke Perry, who’s sudden death resulted in the offing of his character. We’ve seen the premiere and can’t divulge much here, other than to say Shannon Doherty shows up in a guest spot, and delivers some of the best work of her life. Fans of Perry—or of teen soaps—should not be disappointed.

The Dark Knight, at last, comes to The CW, and this time, it’s she. Ruby Rose stars in Batwoman, the new series about Gotham’s first out-queer crimefighter. Rose plays Kate Kane, a butch lesbian (like the actress that plays her, incidentally) on a motorcycle who returns to Gotham City only to learn that Batman has vanished, and supervillains have wreaked havoc on the population. Seeing some advice from her cousin, Bruce Wayne, Kate, accidentally discovers the Batcave, and decides to don the cape and cowl herself. Batwoman borrows heavily from Christopher Nolan’s Dark Knight trilogy, and is probably the most ambitious of all The CW’s superhero shows to date. Ruby Rose has a natural star quality that makes her captivating to watch.

Airs on The CW October 6.

Speaking of the Batman universe, the much-discussed, very controversial new film Joker lands in cinemas this week too. The stand-alone Joker origin story won the Golden Lion Award at the Venice Film Festival last month. When it played in Toronto a few days later, it divided audiences. Some called it a contemporary masterpiece, a powerful comment on incels & mass shootings, while others called it a morally reprehensible, depraved exercise in ultra-violence. Whatever it says, the Army has issued pamphlets to service personal warning of possible shootings during screenings. So which is it: masterpiece or total garbage? You be the judge, though comments by director Todd Phillips have a renewed feeling of skepticism in our stomachs.

The At Long Last: Celebration

Fashionistas should take note on the release of Celebration this week. Director Olivier Meyrou completed the documentary—a harsh look at the aging designer Yves St. Laurent and his longtime boyfriend/husband Pierre Berge—in 2007. The film so infuriated Berge that he had it suppressed until his own death in 2017. Now Celebration comes to cinemas, offering a glimpse into the creative process of one of the world’s most important designers, and into the tumultuous relationship between Berge and St. Laurent. It’s a must for admirers of St. Laurant, both because it deconstructs his legend, and elevates him as a man. 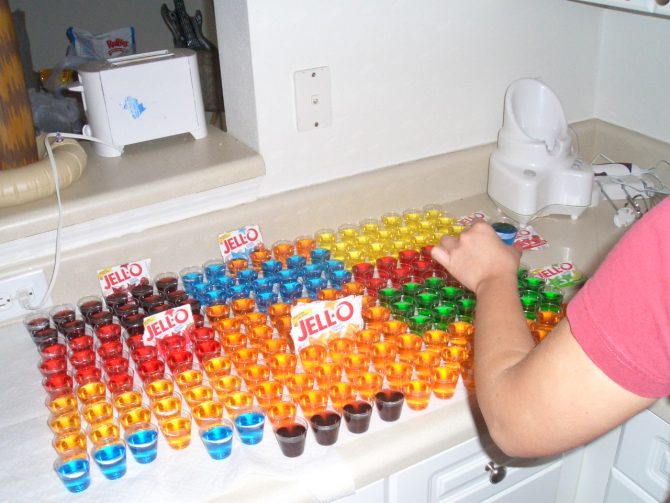 October 4 is National Vodka Day, and in honor of the holiday–and the colorful selections this week–celebrate with a sampling of this college staple. It’s still a fruity, fun way to kick off a watch party.