The Savage: The Politician Season 2

Politicos in need of some levity—and some biting humor—rejoice: Season 2 of The Politician lands on Netflix this week. The new season picks up not long after the first left off, with Peyton Hobart (Ben Platt) trying to land a state senate seat. This season also adds two new regulars: Judith Light and Bette Midler as Peyton’s senate opponent and her campaign manager, respectively. As with the first season, the very talented cast offers enough invitation to watch. We’re also happy to report that the initial cast doesn’t get upstaged by their new co-stars; everyone has a moment to shine. Add to that Light’s self-absorbed, horny Senator and Midler’s manic manager, and the new season takes on a whole new level of crazy.

Netflix continues its grand slam of incredible documentaries this year by nabbing this Sundance doc on transgender images in film. Director Sam Feder compiles the most impressive lineup of transgender artists yet ever assembled to retrace a history of trans representation in TV and film. It should come as no surprise to anyone familiar with The Celluloid Closet that those images date back to the dawn of the medium, and that even some of the most positive images of transgender people are also some of the most problematic. Who’d have thought that tabloid talk shows would also become one of the most innovative arenas for transpeople to tell their own stories? Who’d have thought that Bugs Bunny is also a transgender icon? Intriguing, occasionally frustrating, often hilarious and deeply moving (we’re still teary from an autobiographical story told by Jen Richards), Disclosure will likely rank as a defining queer text for years to come. We can’t think of better viewing during pride month.

The Infuriating: Bully. Coward. Victim. The Story of Roy Cohn

Director Ivy Meeropol marks her third foray into feature documentaries with this deeply personal indictment of the most evil man in American history, Roy Cohn. A closeted gay man who eventually died of AIDS, Cohn made a career as a mob lawyer and far-right political operative, mentoring unsavory figures like Donald Trump and Richard Nixon into their corrupt administrations. Cohn also helped convict—and frame—Julius and Ethel Rosenberg, the notorious Soviet spies, and relished sending them to the electric chair. As the granddaughter of the Rosenbergs, Meeropol has every reason to hate Cohn. How shocking then that she manages to show so much empathy for the man. Though Bully. Coward. Victim. does feature some story overlap with Matt Tyrnauer’s excellent Where’s My Roy Cohn, the film manages to find its own unique identity, as Meeropol shows Cohn the very humanity he couldn’t show anyone himself.

This savage cult series returns, making a new home on HBO Max. Season 3 picks up right where Season 2 left off, finding an increasingly desperate Dory (Alia Shawkat) arrested for murder, her sometime boyfriend Drew (John Reynolds) trying to flee the country, and their friends Elliot (John Early) and Portia (Meredeth Hagner) at their wits end. As with the first two seasons, the series plays like a Scooby-Doo mystery as written by Tom Wolfe, full of biting humor, plot twists out of a film noir and self-absorbed character that take narcissism to a whole new level. Satire? Or a troubling sign of our times? Watch and decide for yourself.

The Read: The Deviant’s War

First-time author Eric Cervini chronicles the life and works of Frank Kameny. A brilliant astronomer, Kameny enjoyed a prestigious Department of Defense job until his government bosses learned he was gay and fired him. Kameny, however, wouldn’t go quietly. He would go on to found the Mattachine Society, one of the first-ever gay rights groups in the United States. He would also fight to get his job back, in a battle that spanned from 1957 into the 1980s. Cervini paints Kameny as a complicated, stubborn man, and in so doing, offers up a portrait of a here to-untrumpeted gay hero, one that deserves celebration alongside Harvey Milk, Marsha P. Johnson, Bayard Rustin and Billie Jean King.

The Event: It Gets Better Presents Digital Pride

Drag Race alum Peppermint hosts this shelter-in-place three day pride festival, available free on YouTube and Facebook. Fellow Drag Race vets Jujubee and Crystal Methyd will also headline, along with Rebecca Black and Caleb Marshall. With pride festivals around the country nixed due to COVID-19, we could go for a bit of festivities. Grab a drink, pull up a chair, and enjoy the fabulousness.

The Sip: The Midori Sour 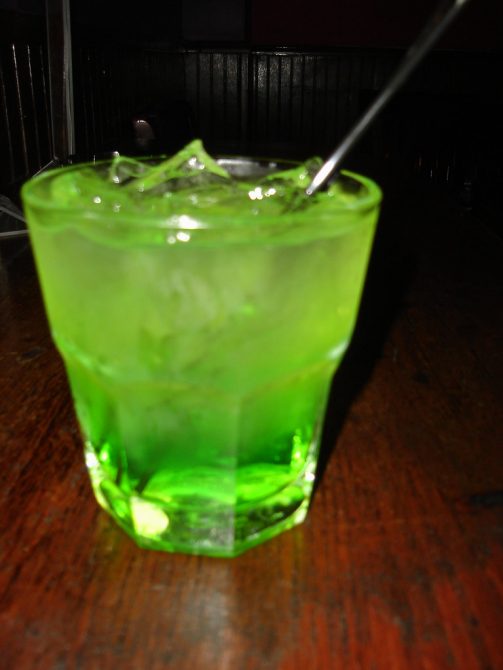 Maybe we’re just green, sick from having to miss out on pride festivities this year. With that in mind, we suggest this fruity classic for a little shelter-in-place sippage.