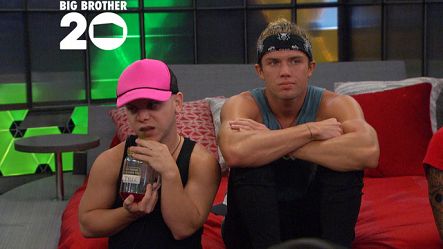 We know why they call it “the boob tube,” and it does not involve cleavage.

Noted Big Brother boob JC Mounduix found himself at the center of yet another controversy this week after cameras caught him touching sleeping fellow houseguest Tyler Crispen.

The August 28th episode of the show contained an awkward scene in which JC slid in bed next to the sleeping Tyler. He then began rubbing Tyler’s arm, face and chest before kissing his armpit.

You can watch the scene here.

The next day, Tyler complained to contestant Kaycee Clark that he slept poorly the night before thanks to JC’s advances.

Twitter predictably exploded during the episode, with viewers wondering if JC’s actions constituted sexual assault, or if castmate reactions would have been different if JC had done the same to a woman.

Jc inappropriately touching Tyler is NOT okay.
It’s happened multiple times and somehow it still continues to happen. @CBSBigBrother needs to do something about it! #bb20

IMO no one has a right to kiss another person's body while they sleep without their permission. JC should be talked to about this. And Tyler should be shown the footage. Imagine if it were a female/straight male. People would be outraged #bb20 pic.twitter.com/GJ2hFfQqOl

JC has sparked a number of controversies on the show this season. In the past, he told Kaycee to “open up her vagina” while wielding an ice cream scoop. He also sparked backlash after using the “N-word” with a fellow contestant, and for discounting the #MeToo movement. CBS released a statement to Us Weekly claiming it warned the contestants over their behavior.

Though CBS appears to protest JC’s conduct, we have a feeling they’re loving the spike in ratings.