The Step Out: Adam

Out-trans director Rhys Ernst brings lesbian author Ariel Schrag’s controversial novel to the big screen in his feature film debut. Adam follows the naive title character (Nick Alexander) who poses as a transgender man when he falls for the beautiful Gillian (Bobbi Salvor Menuez). Needless to say, the film version of Adam has already attracted calls for boycotts over its subject matter. We happened to attend the world premiere at the Sundance Film Festival earlier this year, and can attest: Adam iexamines the issues surrounding transgender and queer identity, safe spaces, disclosure and attraction with surprising complexity. It also happens to be very entertaining, and as such, it deserves to be seen.

Opens in New York August 14 and in Los Angeles August 23 with a national rollout to follow.

The Charged: End of the Century

In theatres in New York August 16. National rollout to follow.

We reported on this new series—the first-ever gay telenovela on Univision—back when the network made the big announcement The Heart is Never Wrong spins off from the popular soap My Husband Has More Family, which introduced the world to the adorable gay couple Aristóteles (Emilio Osorio) and “Temo” (Joaquin Bondoni). Now the two get their own series, following the tribulations of their young love…complete with some fairly frank sex scenes. Fans of queer romance should look no further!

Out-gay actor Jonathan Groff returns for a second go-round in this psychological thriller, produced by Oscar-nominated director David Fincher. Season two picks up in 1979, with Groff’s FBI investigator Holden Ford tracking down a real-life child serial killer in Atlanta. As with Season 1, the blurred lines between fact and fiction only add to the suspense and utter creepiness of the series. Besides that, Groff delivers excellent work in the lead role, a character worlds away from Looking.

The Sip: The Big Spender 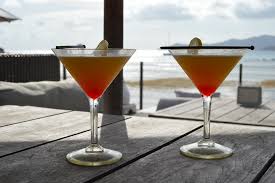 In honor of one of Bob Fosse’s most impressive song & dance numbers ever (trust us, watch it if you haven’t), we suggest the Big Spender as this weeks sippage. Sweet but potent, it’ll have you doing high kicks too.

Combine ingredients over ice in a glass. Stir well. Strain into a flute glass. Garnish with an orange peel for extra class.