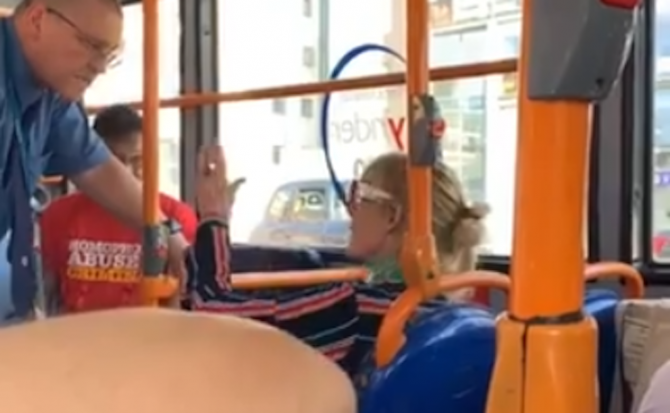 A bus passenger’s “Homophobic Abuse Is Criminal” t-shirt didn’t stop a woman from screaming hatred at him in Manchester, England, according to another passenger on the bus.

The confrontation went down on Saturday, August 24, after the man attended Manchester Pride. “The man was talking to people about how he had put a red bow on a policeman, which raises awareness for HIV,” Karina Townsley, who was on the bus, told the Manchester Evening News.

“It was a dead good atmosphere but then the woman started abusing him,” Townsley said, adding that the woman called the man a “fa**** and an ar******.’”

“She asked why he was gay, asking if he had been sexually abused,” Townsley recalled. “He was trying to ignore the abuse. Everyone was disgusted.”

Video from the incident shows the bus driver telling the woman to “keep [her] voice down and mind [her] language.”

Townsley also pipes up in the video she shared to Facebook. “He’s not done anything to you,” she tells the woman. “You’re being nasty for no reason.”

Related: Reporter shares homophobic messages he received after posting photos of him and his boyfriend

For his part, the man told the woman, “You have the freedom to be who you want to be. We can all be who we want to be, especially this weekend.”

Townsley told the newspaper the woman’s homophobic rant also rattled her 7-year-old daughter, who had a pride flag painted on her face: “My daughter was shaking. She isn’t used to conflict.”

“I was really shocked at first. I thought, ‘Am I hearing this right?’” Townsley added. “I am bisexual myself and have got lots of gay friends, and to hear things like that is disgusting. I thought the most shocking thing was that he was just sitting there taking it. It was like he was used to it.”