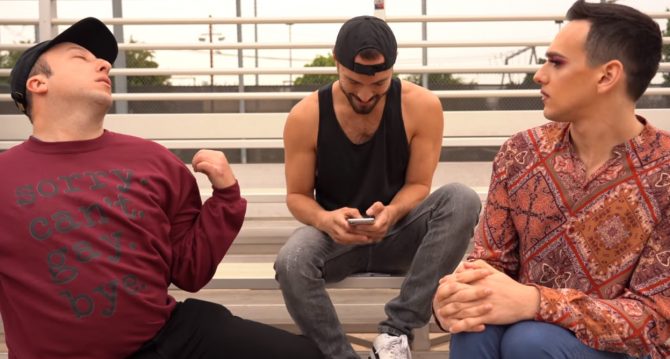 His new sketch features himself and two friends (played by Adrian Achondo & Lyle Mackston), talking about anuses. When one gets an alert from Scruff, the comedy ensues.

Michael sneaks a look at his friend’s profile, which features obnoxious profile demands like “if you don’t work out, we won’t work out” and “masc 4 masc.”

“I just like guys’ guys, guys that work out and go to the gym like me,” Michael’s friend says. “It’s just a preference.”

Michael responds by calling himself “fem 4 fem,” and launching into a rant about how liking femme guys doesn’t involve putting on a facade, and how the “masc 4 masc” claim usually acts as some kind of concealer for insecurity or fear of rejection. He and his make-up wearing friend then run off together, leaving their “masc 4 masc” friend alone and scared.

Like most of Henry’s work, the new sketch cuts deep into stigmas queer men often grapple with. And like his other work, it’s very funny.