Two-time Oscar winner Hillary Swank leads an impressive ensemble cast in this new Netflix drama. Away follows the personality clashes on the first manned mission to Mars, as a team of brilliant and diverse astronauts struggles to work together across cultural divides. That includes one character with a big queer secret, though we’ll not say more than that here. The technical elements of Away set it far apart from other sci-fi shows, as the creative team strives for scientific accuracy in every episode. That also means keeping the astronauts in anti-gravity, which makes for some very tense and exciting sequences. Away also veers toward the melodramatic at times, so thank goodness for the impressive performances led by Swank and fellow standout Vivian Wu.

The works of legendary gay, African-American filmmaker Marlon Riggs finally arrive on streaming  this week. Riggs’ works deal with the intersectionality of racial identity, queerness, and masculinity in a groundbreaking way. His film Tongues Untied caused a sensation when it aired on PBS in 1991 for its depiction of male on male affection and a bit of nudity. Today, with the ongoing cultural conversation around Black Lives Matter and the treatment of LGBTQ African-Americans—particularly trans people—by both the queer and African-American communities, the work of Riggs takes on a new urgency and resonance.

The scathing mind of satirist Paul Rudnick takes on the year 2020 with this new anthology special. Needless to say, sparks and hilarity fly. Coastal Elites features five different characters—including a gay man—struggling to cope with the ongoing COVID-19 crisis and Trump-era stupidity. Each character performs their segment as a monologue delivered to a friend via webcam. Of course, the talk gets political, and while the film does hit Trump and his supporters the hardest, it doesn’t exactly let the coastal liberals off the hook, either. Bette Midler, Issa Rae, Sarah Paulson, Kaitlyn Dever, and Dan Levy all deliver fantastic work, courtesy of Rudnick’s hilarious and provocative script, and the deft direction of Jay Roach (Bombshell, Austin Powers).

Director Quentin Lee, fresh off the success of his experimental film Comisery last week, returns this week with a new live comedy special. Brash Boys Club features the stand-up stylings of Brad Loekle, Dash Kwiatkowski and Owen Alabado, three openly gay comedians unafraid to share the woes of their personal and professional lives to get a laugh. Needless to say, many a reader will relate. Filmed before the COVID-19 pandemic, Brash Boys Club also features a cameo by Queerty’s own Entertainment Editor, seen laughing in the second row. What can we say, it’s funny stuff.

The Holy Trinity: Trinity The Tuck’s Love for the Arts

Drag star Trinity The Tuck, best known for her multiple stints on Drag Race, tipped us off to this new digital series, a sort of indie version of the show that made her famous. Love for the Arts features a group of drag performers competing in design competitions, comedy sketches, and of course, plenty of lip-syncing. Trinity herself plays the RuPaul role as judge and drag mentor. Filmed via webcam, the series features drag queens from all over the world competing for a $5,000 prize. With guest judges Alaska Thunderf*ck, Peppermint and Shea Coulee all turning up for guest judge spots this season, we recommend the show for anyone tired of Drag Race drama…or anyone who can’t get enough of it.

Streams on every Tuesday on Twitch.

Electropop siren Dua Lipa graces fans with an all-new album-length movie, visualizing the tracks off her album Club Future Nostalgia via new remixes. That includes new versions of the hot singles “Levitating” feat. Madonna & Missy Elliot, “Physical” feat. Gwen Stefani, and two versions of “Hallucinate” set to a series of surreal, trippy images. It makes for great listening with a cocktail in hand during an impromptu dance party…properly socially distanced, of course. 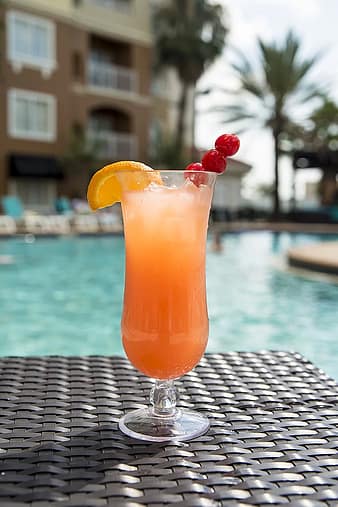 In honor of Away‘s trip to Mars, we highlight this sweet citrus cocktail for the week. Easy to make, bright and unusual, it also pairs well with the psychedelic colors of Club Future Nostalgia‘s visuals.