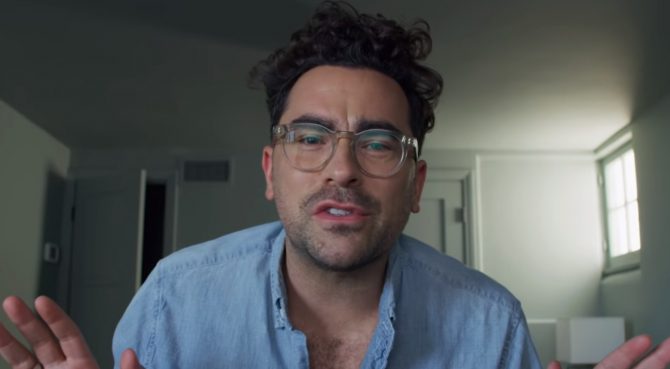 The actor, best known for his iconic role on the sitcom Schitt’s Creek, will next appear in the HBO special Coastal Elites. Directed by Jay Roach (Bombshell, Austin Powers) and written by Paul Rudnick, the openly-gay writer of Jeffrey, Addams Family Values and In & Out, the special features five people having webcam conversations during the COVID-19 pandemic. Each delivers, in essence, a monologue to the camera discussing the woes of the ongoing crisis, Trump’s inaction and the chaos it has wrought.

For Levy, that means playing the role of an actor auditioning for a godsend role: that of the first gay superhero lead in a major motion picture. In the new clip, his character, Mark, discusses the effect nabbing the role would have on his career…and all the ridiculous questions about his sexuality people inside and outside of showbiz feel entitled to ask.

“I’m all for queer representation,” Levy says in the clip. “Yes, sometimes I say ‘gay,’ sometimes I say ‘queer,’ and sometimes I just show people a picture of myself on Halloween in high school dressed as Julianne Moore in The Hours.” (Yeah, we can relate.)

“Dan had been in those audition rooms and he had to deal with the power structure that is trying to figure out the testing of, treatment of, and presentation of both gay actors and gay roles,” Rudnick tells Vanity Fair. “Everyone’s been in a room where they’re not sure of who’s accepting them, who knows what, and who they can trust. I think Dan expresses all of that.”