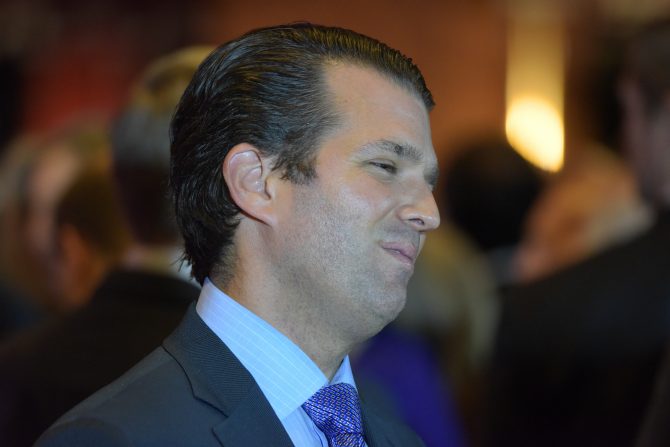 Based on this previous meme, we already knew Donald Trump Jr. has been watching Tiger King on Netflix. The show, of course, follows Joe Exotic, the gay big cat enthusiast serving a 22-year sentence in a federal prison in Texas. Donald Trump Jr. seems to see him as something of a role model; it’s more than a bit bizarre, and it just gets weirder and weirder.

Exotic was found guilty of 17 charges of animal abuse and two counts of murder for hire for attempting to take out his nemesis, Carole Baskin.

Trump Jr. shared a disturbing image of a Trump-Joe Exotic hybrid, seeming to find a common antihero dynamic in both figures:

Hahahahaha I love the internet. I heard about this guy???

And he didn’t stop there.

A little humor to brighten up your Monday morning. ???

And as if this wasn’t all grotesque enough, Trump Jr. appeared on the conservative, far-right One America News Network (OAN) — which, by the way, Donald Trump heaps praise on due to its sycophantic coverage of him — to share yet more takeaways from his binge-watching of Tiger King.

That lead to this remarkable hot take after the OAN host asked Trump Jr. and his wife what they’ve been watching during the lockdown.

“We’ve basically watched Tiger King in two sittings — it’s sort of amazing. I’m just really disappointed that I didn’t know you could get a tiger for two grand. It’s a lot of money, but like, it’s a tiger! That would have been pretty cool to have a tiger hanging around the house.”

Of all the takeaways from Tiger King — which we fully endorse as captivating entertainment — wishing you, too, could own a tiger is downright delusional.

Then again, what would you really expect from Donald Trump Jr., a guy who shoots animals for fun and poses with them like trophies.

You can learn more about the Trumps’ horrific relationship with OAN, Trump Jr.’s groan-inducing read of Tiger King, and an unhinged bonus breakdown on “transgender penguins”, in this clip from John Oliver — just prepare for your eyes to roll completely out of your head: