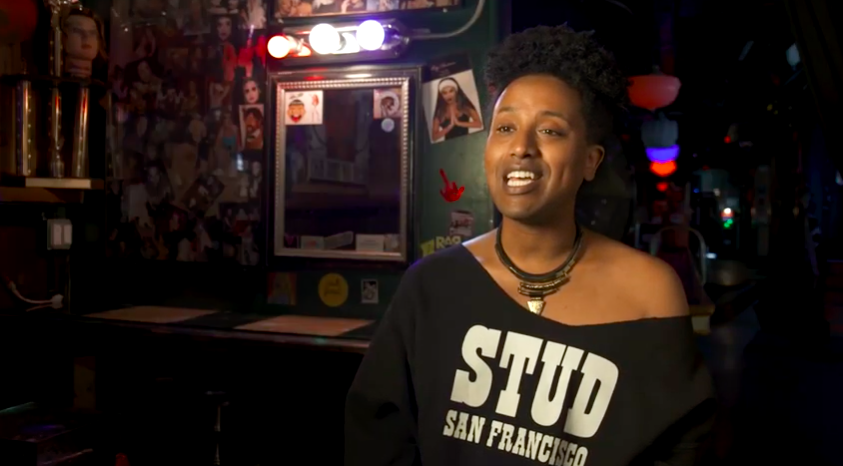 Honey Mahogany is perhaps best known for starring in the 5th season of RuPaul’s Drag Race, distinguishing herself for singing her own songs before being foiled by a gorgeous caftan that somehow failed to impress the judges. Then came the release of the EP Honey Love, where her sultry voice was again on display.

Yet Honey’s greatest accomplishments at the age of 36 may well be out of the limelight. Since the breakthrough Drag Race appearance, she has starred as in another platform altogether: San Francisco politics. Not only did she help establish the city’s commemoration of trans history, the Compton’s Transgender Cultural District, she also serves as a legislative aid to a member of the San Francisco’s board of supervisors, where she advocates for all things LGBTQ.

Honey, who is African-American, identifies as queer and gender-non conforming trans. And she is clear about the inspirations for her boundary-defying identity as well as her advocacy: “San Francisco’s wealth of characters” who inspire locals and visitors alike to “express themselves and push boundaries without fear.”

And express herself she has. Honey can be spotted across the city in a range of productions at iconic locations, always highlighting the city’s gorgeous mosaic of diversity. She starred in shows including Peaches Christ’s The Craft… of Drag! at the Castro Theater and D’Arcy Drollinger’s Star Trek at the Oasis. She also played Scary Spice in a live reading of Spice World at Clusterfest and emceed Topsy Turvy: A Queer Circus Extravaganza. Mahogany has hosted the Castro Street Fair and Mahogany Mondays at the infamous The Castro bar, Midnight Sun.

In 2017, Mahogany and Sister Roma became the regular hosts for the main stage of San Francisco’s enormous pride celebration.

Watch as Honey takes Queerty inside the Stud, champions the unique nightlife of San Francisco, and chats about preserving the legendary queer club for future generations: