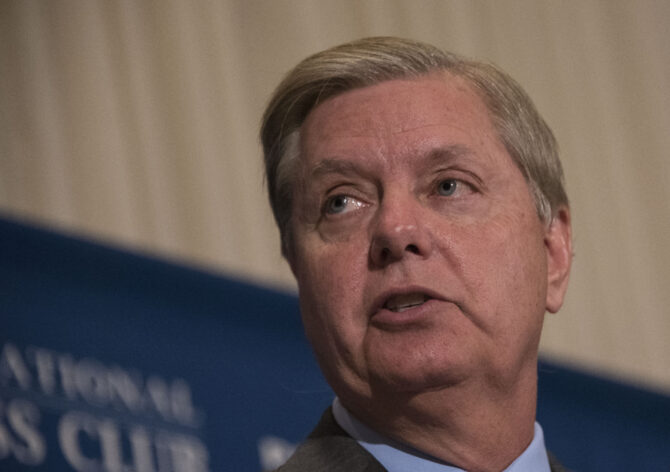 Lindsey Graham isn’t letting things like common decency and public opinion affect his quest to roll back abortion rights even further. But he’s going to have to get used to interactions like the one he just had with a protester.

The anti-LGBTQ senator has launched a proposal for a nationwide ban on abortions after 15 weeks of pregnancy, vowing to take up the issue in Congress if Republicans gain control of the House and Senate in November. If that’s not an advertisement to vote Democrat, we don’t know what is.

During a recent event, protesters confronted Graham over the plan. Ashley Beasley was among them; she explained that she chose to give birth after doctors told her during her 16th week of pregnancy that her baby would not survive.

Her son died eight days after being born, but she says it was vitally important that it was her choice to give birth.

Speaking directly to Graham, she said: “We were allowed to make that choice for him.”

“You would be robbing that choice from those women,” Beasley added. “What would you say to someone like me?”

Looking visibly uncomfortable, Graham responded: “[The] world has pretty much spoken on this issue. The developed world has said at this stage of the pregnancy, the child feels pain, and we’re saying we’re going to join the rest of the world and not be like Iran.

“As to your particular case, there will be exceptions for the life of the mother, rape, and incest.”

Yes that’s me crashing @LindseyGrahamSC’s abortion sideshow presser. NO I didn’t have an abortion at 16 wks. Wes was born at 28 wks & lived for 8 days. But we made a choice that every parent should be allowed to make. @DailyMailUK @atrupar Here’s our story https://t.co/JbnLKFa1aI pic.twitter.com/cmiYmWNWxH

The Biden administration has strongly condemned Graham’s plan. Press Secretary Karine Jean-Pierre said that “this bill is wildly out of step with what Americans believe.”

“While president Biden and vice-president Harris are focused on the historic passage of the Inflation Reduction Act to reduce the cost of prescription drugs, health care, and energy – and to take unprecedented action to address climate change – Republicans in Congress are focused on taking rights away from millions of women,” she added.

Related: After 30 years of bigotry, the “gayest city in America” may finally put this GOP Rep. out to pasture