The Screamer: M.O.M. – Mothers of Monsters

Out-gay actor Bailey Edwards (son of ER’s Anthony Edwards) plays his first leading role in this new horror film. M.O.M. pairs Edwards with Melinda Page Hamilton (of Desperate Housewives) as mother Abbey and her son Jacob. Abbey has begun recording everything on hidden video around the house, convinced that Jacob will one day become a psycho killer, who also might be gay (the movie toys with us on that subject). Jacob reacts with reasonable disgust…and develops a terrifying plan of his own. M.O.M. echoes psychological thrillers like Goodnight Mommy and Whatever Happened to Baby Jane as it chronicles the descent into madness of its lead characters, and has some provocative observations about psychological incest, gun culture, and mental illness. Moreover, it features two terrific performances from Hamilton and Edwards, both of whom prove they can carry difficult material.

Speaking of the visually striking, the choreography of gay dancer Merce Cunningham comes to life in this documentary from director Alla Kovgan. During his long career, Cunningham developed a reputation as a great innovator of dance, often collaborating with visual artists like Andy Warhol and Jasper Johns or with musicians like Brian Eno and Radiohead to create new forms of interpretive dance. Cunningham recreates some of Cunningham’s most provocative dances, and shares anecdotes around their conception, reception and artistic statements. It also features breathtaking photography, originally shot in 3-D. We’re happy to report that the streaming & DVD versions of the film, while in 2-D, retain the power of said images. It’s a must for queer history aficionados, fans of dance, or anyone wanting to get lost in spellbinding imagery.

The Throwback: The Wizard

Out-gay director Todd Holland had no idea he’d made a cult classic back in 1989 when The Wizard bombed in theatres. Thank goodness for home video, where kids of the era quickly discovered and fell in love with its romantic adolescent adventure. Fred Savage stars a Corey, a middle-class kid trying to protect his younger brother Jimmy (Luke Edwards), who suffers from undiagnosed mental illness and has a knack for beating video games. When their parents try to lock Jimmy in a mental institution, Corey & Jimmy join forces with Haley, a girl forced to live on her own. The three set off to a gaming tournament in Hollywood, convinced they can win a $50,000 grand prize to keep Jimmy out of the institution, and wild adventures ensue. Thirty years on, The Wizard endures for its mix of video game nostalgia, rich characters and charismatic performances by its young cast. The Shout Factory has released a loaded-up Blu-Ray to celebrate the film’s 30th Anniversary featuring deleted scenes, cast & crew interviews and a commentary by Holland. It’s a fine way to revisit childhood.

The Quickie: Reach the Sky

We fell in love with this pensive short film about LGBTQ identity, and at long last, it hits the web this week. Told using stop-motion animation and yarn puppets, Reach the Sky follows three characters as they confront issues of love and gender. Set to the Queer Songbook Orchestra’s version of Rita MacNeil’s “We’ll Reach the Sky Tonight,” it’s a touching ode to the community, and an optimistic dream for the future.

Queer Persian singer Gia Woods dropped her latest single this week, off her forthcoming album Cut Season due this May. “Ego” features Woods writhing in foliage and playing dress-up with some other gorgeous women. It’s a sensuous pop tune, a meditation on how ego often gets in the way of finding love. Have a look & listen and try not to writhe and slither yourself. 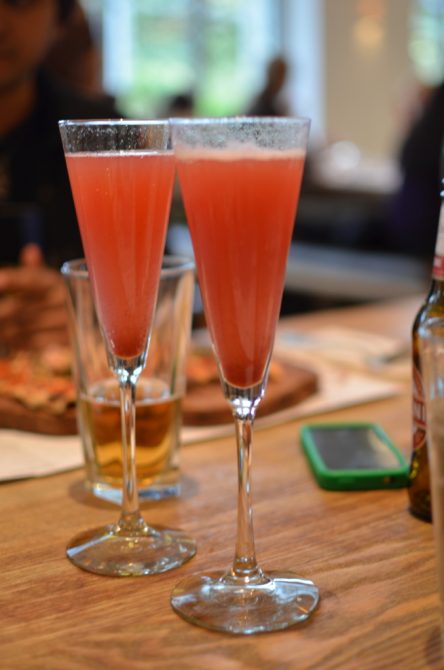 In honor of Nevrland hitting streaming services this week, we offer the Neverland Bellini for sipping pleasure. Fruity and light, it pairs well with just about anything. Even better, it can be made with canned goods, which will come in handy during quarantine.

Mix raspberries, lime juice & orange juice in a cocktail shaker. Shake well and pour into the bottom of a champagne glass. Add sparkling wine and enjoy.

Subscribe to Queerty for a daily dose of #entertainment #cunningham #m.o.m. stories and more