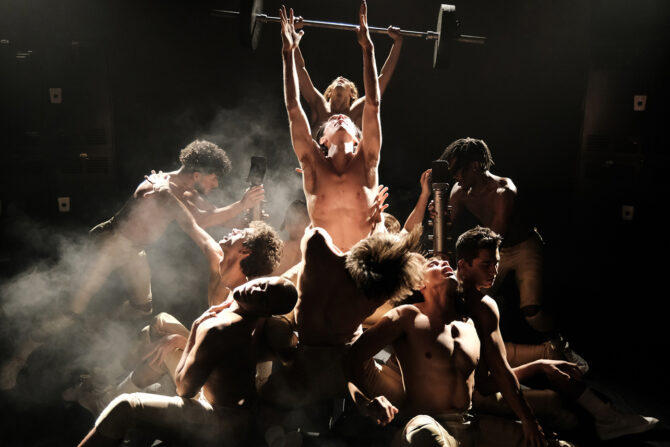 Euphoria viewers have been patiently waiting for the ticking time bomb of Lexi’s play to finally go off, and boy, did it go off.

For the past several episodes, Lexi (Maude Apatow) has been working on a play called Our Life, which, true to its name, explores the lives of Lexi, her older sister Cassie, and their friends Rue, Kat and Maddy.

Related: Actor who bared it all on ‘Euphoria’ says nope, not a prosthetic

Except in this play-within-the-series, there’s something just a tad homoerotic about Nate and his group of jock friends.

Set to the tune of Bonnie Tyler’s “Holding Out for a Hero,” the dance left quite the impression on both audiences — the one in the show, and the ones watching at home.

“We filmed that over a three-day span, and it was a lot of work,” Austin Abrams, who plays the fictionalized play version of the already-fictional Nate, told Variety about shooting the scene. “It took a lot of physical exertion. I was doing that dance a million times over those days. But, I loved the dance, I loved the guys that I was dancing with and it felt very real. I loved the energy exchanged between the performers and the actors and the audience because there was a crowd there.”

“It’s one of those songs that makes me so happy,” he added. “It puts everyone in a great mood, honestly.”