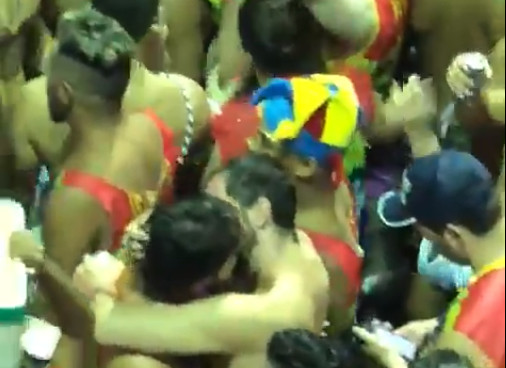 Get out your tinfoil hats, people.

A video making the rounds on social media has spread the false idea that gay men caused the outbreak of the coronavirus.

PinkNews reports that the video, which has turned up on Twitter, Facebook and Instagram, and received thousands of shares, allegedly shows a gay party in Italy that took place shortly before the outbreak began.

“God has every right to be angry with humanity, this was the last gay conference in Italy before the virus attack,” Facebook user Tony White wrote when he shared the post. “Let’s continue to pray for His mercy to prevail over judgment, just see what is going on couple with innocent blood crying for revenge.”

Apart from the latent homophobia in the post, it has one major problem: the allegations are not true.

In fact, the video was taken at a carnival in Brazil. An investigation by AFP Fact Check revealed that the video was shot at Brazil’s Bahian Carnival in February of this year. Furthermore, people shown in the video are wearing t-shirts from the Brazilian party Bloco Crocodilo, and a popular Brazilian pop song “Minha pequena Eva,” plays in the background.

Approximately 1.8 million worldwide people have contracted the COVID-19 virus since the outbreak began early this year. Around 100,000 people have died from the disease. Both Italy and the United States have sustained heavy hits by the virus, prompting a number of anti-queer religious and political demagogues to blame the outbreak and spread of the disease on gay men, despite no evidence to support the claim.