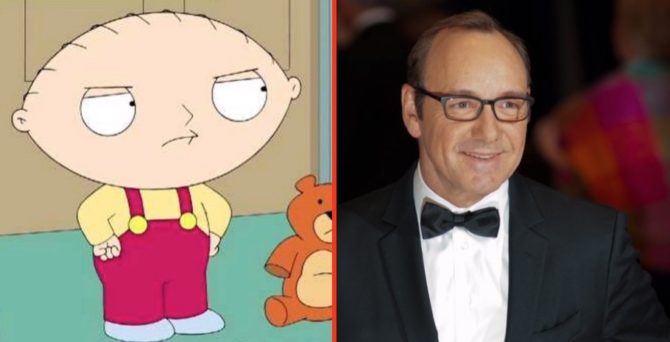 A theme is emerging amid recent Hollywood abuse allegations: hiding in plain sight.

In Harvey Weinstein’s case, everyone seemed to know — there’s video of Courtney Love warning women of exactly the type of behavior that finally came to light, multiple jokes were written into Tina Fey’s 30 Rock about the subject, and then there’s this joke that Seth MacFarlane made while announcing Oscar nominees in 2013.

Of particular note is the joke’s success in the room full of Hollywood insiders. They clearly understand the punchline:

Well in light of Sunday’s explosive allegations that Oscar-winning actor Kevin Spacey sexually assaulted a then-14-year-old Anthony Rapp, many have pointed out that Spacey’s sexuality, as well as his attraction to younger guys, was hardly a secret.

Strangely, MacFarlane once addressed this, too.

In a 2005 episode of his popular animated series Family Guy, Stewie runs through what appears to be a shopping mall yelling, “Help! I’ve escaped from Kevin Spacey’s basement! Help me!”

Twitter users were quick to connect the dotted lines:

What else do you know, Seth?

Re: Kevin Spacey — so… how many more “open Hollywood secrets” has Seth MacFarlane and/or Family Guy put out there for folks to see? Starting to wonder if we need a tally.

Family Guy did a spoof on Kevin Spacey involving Stewie.

Related: “Sex and the City” actor Gilles Marini: I was “a piece of meat” for Hollywood execs