Lin-Manuel Miranda adds the title of “director” to his ever-expanding resume with this musical biopic of Rent composer Jonathan Larson. tick…tick…BOOM! began life as a one-man show performed by Larson off-Broadway. Following his death and the posthumous success of Rent, Larson’s family and playwright David Auburn reworked it into a more traditional musical.

Now Miranda, along with screenwriter Steven Levenson rework the material yet again, transforming it from a show performed by Larson into a film about him. Andrew Garfield stars as the angst-ridden composer struggling to break into the Broadway scene in the late 1980s. Despite some encouragement from his idol Stephen Sondheim (Bradley Whitford), Jon can’t seem to get a foothold. His ongoing crisis begins to take its toll on his relationship with girlfriend Susan (Alexandra Shipp) and gay bestie Michael (Robin de Jesús). Amid his professional and personal strife, Larson becomes aware of a constant ticking…the sound of life passing by before the alarm finally tolls.

Much to our delight, in the hands of Miranda and Levenson, tick…tick…BOOM! works even better as a movie, told in a mix of style that includes both full-on, old-school production numbers and diegetic songs. Garfield dives into the lead with total commitment, and also proves himself a very capable song and dance man. It helps, of course, that he has plenty of support from Shipp who, in her first “adult” role, displays a level of talent and charisma she’s never had the chance to show off before. The same goes for de Jesús, who gets his best movie role to date and gives a moving performance as a gay man facing the AIDS crisis. Supporting turns by Vanessa Hudgens, MJ Rodriguez, Joshua Henry, and Judith Light also add to the appeal. Broadway fans will also relish a cameo-riddled musical number that unites more stage legends than we’ve ever seen outside the Tony Awards. No, we can’t spoil who here, but trust us–it’s worth the watch.

So is the rest of the movie. It’s obvious that Miranda, the mind behind In the Heights and Hamilton feels a strong kinship with Larson, both in terms of profession, and in terms of artistic drive. In a sense, it’s his story too: the tale of a struggling, ambitious composer determined to change history, and for whom the effort paid off.

The Trendy: The Curse of Von Dutch

Remember Von Dutch, the celebrity-driven brand that seemed to explode in the early 2000s? If not, this new documentary series from Hulu would like to remind you…and bring you up to speed on the brand’s bonkers origins. Von Dutch began as a collaboration between a gang banger, a stoner and a race car enthusiast devoted to reviving and furthering the designs of the racer turned artist Von Dutch. Originally sold on the literal streets as an underground brand, Von Dutch shot to international fame with an influx of cash from a foreign investor and a marketing strategy that targeted celebrities for free product placement—everyone from Madonna to Whitney Houston to the Backstreet Boys and especially Paris Hilton became unofficial billboards for the label.

Of course, so much exposure in so little time led to Von Dutch becoming something of a fad. This new series, directed by Andrew Renzi, argues that the brand’s overexposed shelf life was the least of its problems. The original co-founders of the brand continue to argue over who should get proper credit for its success, while the series also hints that Von Dutch was actually a money-laundering front for organized crime. Silly as that suggestion might sound, at least one person was murdered over internal disputes within the company, while other Von Dutch executives recall arrests, murder threats, guns brandished in staff meetings, and other general insanity. Much as House of Gucci uses the internal workings of the fashion house as a prism to view the excesses of the 1980s, The Curse of Von Dutch looks at the manic, celebrity-obsessed 2000s with similar regard. Unlike House of Gucci, nobody here seems all that excited to bust out the Von Dutch fashion again (Hilton says she’d only wear it as a joke). The Curse of Von Dutch tells a bonkers story of people living moment to heated moment with little foresight for the future, most of whom go teetering off a cliff. No wonder they call it cursed.

The Unlabled: Sort Of

We caught this fabulously queer series when it debuted at the Toronto International Film Festival. Now, it comes stateside courtesy of HBO Max. Sort Of follows the story of Sabi (series co-creator Bilal Baig), a messy, genderfluid Millennial living in Toronto and working as a nanny for a wealthy family. Amid relationship woes and a clueless employer, Sabi flirts with skipping town with their best friend 7ven (Amanda Cordner) to run away to the queer paradise of Berlin. A horrible accident throws Sabi’s life into chaos, and they suddenly must face a choice of selfish pursuits, or taking on the role of parent to two children they love.

As co-created by Baig and Fab Filippo, Sort Of isn’t so much a meditation on gender and sexuality as it is an exploration of how our lives and relationships are often defined by those two factors. For Sabi, labels are just roadblocks blocking them from being the person they want to be…even if they’re not quite sure who that is yet. The series also examines how what it means to be queer and come from a Muslim-Pakistani upbringing, something we’ve never seen on television before. Much like Sabi, Sort Of explores different facets of identity, intersectionality and how personal growth is a fluidity unto itself. Original and throbbing with queerness, we offer it up as a show as unique as its main character.

Speaking of TIFF, we snagged an early screening of this rocumentary at the festival this year, a chronicle of the seminal album Jagged Little Pill from musical powerhouse Alanis Morissette. Told through a mix of new interviews, archival footage and even Morisette’s original demo tapes, it reconstructs the journey to creating a masterwork that changed pop music forever…a feat rendered all the more incredible considering Morissette more or less wrote it on the spot. Not a person reading this article will not have heard strains of rock-pop staples “Ironic” or “You Oughtta Know.” Jagged explores why these songs endure more than 25 years after release, and the cultural moment that helped spawn them.

Alanis Morissette herself has attacked Jagged for having a “salacious agenda.” While she’s not elaborated on her issues with specific scenes or moments in the film, we suspect that her ire has something to do with the multiple allegations of sexual misconduct she charges over the film’s runtime. Morisette never names her alleged violators, though she does, in the film, recount relationships with older men she had in her early teens. This may be where things get sticky: while age of consent in the United States is 18, in the 1990s it was only 14 in Canada (the government there raised it to 16 in 2008). Morisette uses the term “statutory rapists” to label older men with whom she had relationships at age 15. Given that she was recording in Canada at the time, she make take issue with the film’s lack of context.

The controversy over the film’s salaciousness aside, we found Jagged an energized and enthralling film about one of the Greatest Albums of All Time. Archive footage of then-20-year-old Morissette taking the stage to wail out the album’s classic tracks still packs one Hell of a wallop, and listening to other female musicians (notably Shirley Manson of Garbage) discuss how Morissette’s singer-songwriter brand paved the way for other female stars underlines the importance of the woman, and of the album. We recommend watching this film at maximum volume.

This Belgian documentary arrives on digital this week, bringing its touching story of a queer child to the masses. Little Girl follows the story of seven-year-old Sasha, a transgender girl navigating the pitfalls of childhood, and being trans. Director Sébastien Lifshitz follow’s Sasha’s mother as she struggles to deal with the stresses of making sure her child has proper protection and opportunity in school. The movie also dives deep into her mother’s wrestling (only Sasha is named in the film, perhaps out of privacy concerns) to understand her daughter and, like many a parent of a queer child, face the question: Did I make my baby queer?

Told with quiet elegance and a magnificent score, Little Girl evokes a nature documentary at times. We have a feeling that’s deliberate—Lifshitz wants the audience to understand that queerness is natural among animal species, and a thing of beauty. It’s a perfect film for Transgender Awareness Week, one that pays homage to both the struggle and the beauty of transgender life.

The Exclusive: Julian King “Gone Do”

Queer R&B crooner and sometime The Voice contestant Julian King returns this week with his latest video, a live version of his sensual love ballad “Gone Do.” King claims he came up with the song while playing cards when a handsome stranger caught his eye. It shows: the lyrics to the song gush anticipation and excitement—the kind of butterflies we get in our stomach the first time we see someone beautiful. It’s a song all about flirtation and erotic charge, fueled by King’s sexy lyrics and powerhouse voice. Add it to your playlist that has all of Janet Jackson’s “Baby Making” songs, listen with someone beautiful, and see what happens.

Queer rapper Cazwell unites with trans performers Trace Lysette & Chanel Jolé this week to release this new single about inner strength. For Lysette and Jolé–two stunning women–the beauty runs deep…right into the hidden assertive powerhouse, ready to stand up for themselves. Both ladies have said that the inspiration for the tune came from “walking down the street while trans,” from feeling unsafe and learning self-defense skills. Call it an empowerment anthem written from the trans perspective. And, as will all things Cazwell, the video also comes with a bit of tongue-in-cheek humor. 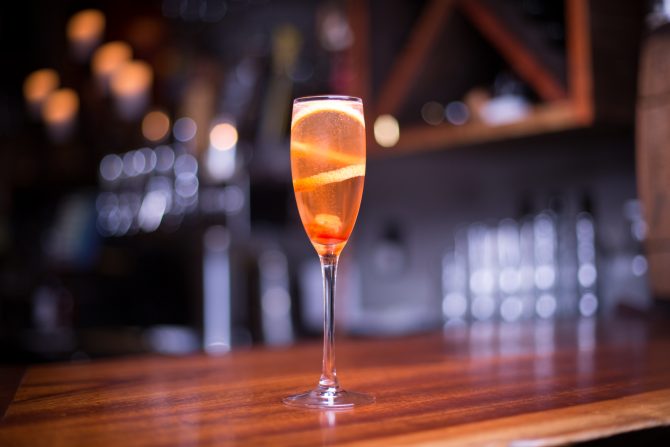 In honor of awards season unofficially beginning, we offer up one of our favorite cocktail recipes of all time: the champagne cocktail. Classy, sweet, and delightfully fizzy, it can also be augmented with a dash of brandy for anyone wanting something a bit stronger. For our money, it’s good for all occasions.

Add a sugar cube to a champagne flute with a dash of bitters. Let it soak a moment, then add cognac if desired. Add champagne. Garnish with a cherry or lemon peel.

Subscribe to Queerty for a daily dose of #entertainment #cazwellvs.tracelysette&chaneljolé's taserinmyteflarbag #cultureclub stories and more

off the market
24 comments