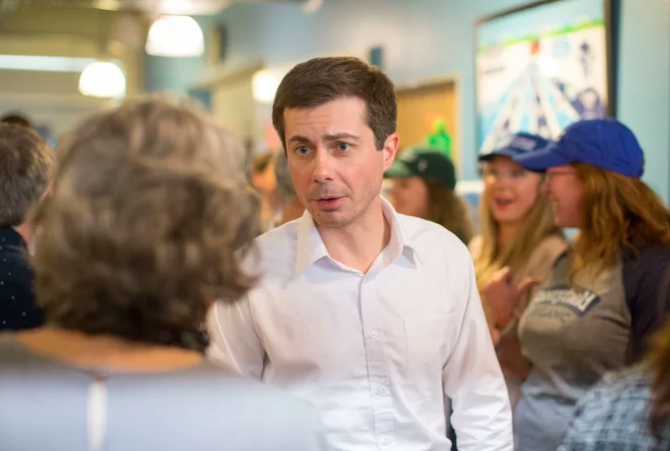 Pete Buttigieg was in Dallas for a campaign event Friday evening when a gaggle of antigay bigots decided to crash the event.

The 2020 hopeful was speaking before an audience at an event hosted by the Dallas County Democratic Party when he was rudely interrupted by a group of Christian extremists who shouted “Marriage is between a man and a woman!”, “Remember Sodom and Gomorrah!”, and “Repent!”

Pete Buttigieg has been interrupted four times here in Dallas by protesters. One yelled “Marriage is between a man and a woman!” Another yelled “Repent!” After the 4th, Buttigieg continued, “The moment I packed my bags for Afghanistan, to defend that man’s freedom of speech…” pic.twitter.com/zIpDSCIrti

One of the hecklers was antigay activist Randall Terry who, earlier this year, vowed to protest five of Buttigieg’s upcoming campaign stops in Iowa and has since developed a bizarre obsession with the 37-year-old presidential candidate, following him around from state to state to state.

Anti-gay protester Randall Terry is back and yelling at @PeteButtigieg pic.twitter.com/SBwjP8ocTZ

Buttigieg was undeterred by Friday’s interruption, however. As the protesters were being escorted from the building, he told the crowd it was all part of why he spent six months fighting in Afghanistan. You know, to defend their right to protest. Even if they were protesting against him.

Afterwards, former Texas Rep. Beto O’Rourke, who is technically competing against Buttigieg for the Democratic nomination, shared words of support for his opponent.

“Texans don’t stand for this kind of homophobia and hatred,” O’Rourke tweeted. “Mayor Pete, we are grateful you came to Texas and hope to see you and Chasten back again soon.”

Texans don’t stand for this kind of homophobia and hatred. Mayor Pete, we are grateful you came to Texas and hope to see you and Chasten back again soon. https://t.co/IhRDtIBREb