The Shonda Rhymes-produced spinoff of Grey’s Anatomy moves its LGBTQ characters front and center this week, as the tense relationship between Travis (Jay Hayden) and neophyte firefighter Emmett (Lachlan Buchanan) moves front and center, the latter confronting his love for Travis with a longtime girlfriend he’s kept as a beard. Expect plenty of drama and (as with so much of Ms. Rhymes work) a sexy montage of the cast. In a time of lockdown, it’s nice to have something a bit soapy.

The Binge: Making the Cut

Speaking of something upbeat, Tim Gunn and Heidi Klum take their fabulousness to this Amazon-style show, which also happens to include a gang of designers, projects and runways. Making the Cut finds Klum & Gunn leading their fledgling fashionistas to a variety of exotic locations to compete to win a fashion brand on Amazon. The show also utilizes a much grander scope than Project Runway with plenty of travel eye candy. When you can’t leave the house, a series like Making the Cut at least provides a window to the world.

The Overlooked: Frankenstein The True Story

Shout Factory just released this near-forgotten miniseries from 1973, which turns up the volume on the homoeroticism of the story. For anyone who has seen gay director James Whale’s 1931 masterpiece, that probably seems impossible. Leave it to a queer creative team that included producer Hunt Stromberg, Jr., as well as writers Christopher Isherwood and his longtime boyfriend Don Bachardy to find new ways to add to the gayness…like making the creature a handsome young man. What began as a story of science gone awry becomes a mediation on vanity, lust and obsession. Horror impresario Sam Irvin (producer of Gods and Monsters) offers commentary on the new disc, which also contains a special restoration of the film.

Streams on Amazon. Also available on Blu-ray from Shout Factory.

The Upbeat: When the Beat Drops

We can’t sing enough praise about this 2018 documentary, the debut outing for choreographer-cum-director Jamal Sims. When the Beat Drops focuses on the underground world of “bucking,” a dance style that grew out of collegiate drum major routines. The style involves men—of all shapes and sizes—donning heels to perform some of the most athletic dancing we’ve ever seen. The film also examines the communities of gay men of color that helped popularize the style, and the complex subversion of gender stereotypes it entails. Part musical, part sports epic, it’s a documentary like no other.

Streams exclusively on WOW Presents Plus.

The Legit: The Laramie Project

The Provincetown Theatre—the Cape Cod mecca for all things queer—has announced that in light of the COVID-19 epidemic, the theatre will actually live stream some of its most acclaimed productions free of charge. The first one we must recommend: The Laramie Project, the tear-jerking drama written in response to the murder of Matt Shepherd. This 20th Anniversary production, directed by Leigh Fondakowski, who actually co-wrote the play, retains all the rage and sorrow of the original…as well as a prescription for hope.

The Sip: Bride of Frankenstein 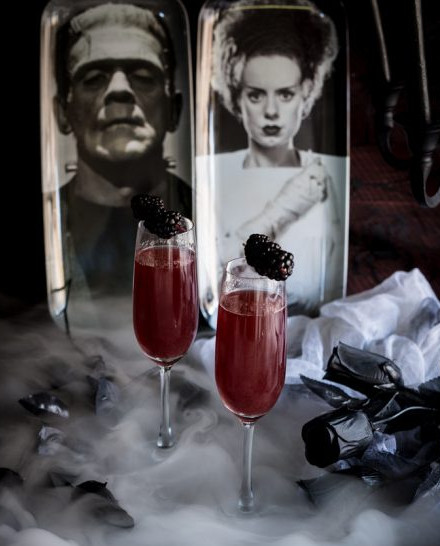 In honor of Frankenstein: The True Story finally making its way to Blu-ray, we recommend this themed berry cocktail to help bring you back to life. We don’t know about you, but after weeks of lockdown, we need it.

Stir jam & vanilla together until well blended. Pour into a cocktail shaker with ice. Add vodka & shake. Pour into flutes and top off with champagne.