The Step Out: Brittany Runs A Marathon

The Sundance smash finally comes to theatres this week. Gay writer/director Paul Downs Colazzio channels his queer sensibilities into this true story, with hilarious results. Jillian Bell stars as the title character, an overweight, low self-esteem party girl who decides to turn her life around by getting in shape. Along the way, she offloads more than calories, facing down her demons and self-image, which weigh her down far more. Bell shines in the lead, as does Micah Stock, who plays her gay bestie. Much like movies like Trainwreck, Brittany Runs A Marathon will do just about anything for a laugh. Unlike other comedies though, it has some very moving twists.

The hit Elton John biopic lands on Blu-Ray August 27, featuring some terrific special features including deleted scenes, extended musical numbers and a special sing-along mode. Taron Egerton proves his range as Elton, while Jamie Bell gives a terrific supporting turn as lyricist Bernie Taupin. The real star though is Elton’s music. Rocketman revives some of Elton’s standards and a few overlooked gems with old-school Hollywood musical flare. Try to watch and not want to dance.

The Binge: 13 Reasons Why Season 3

The queer-affirming Netflix drama returns for a third season this week. This new series finds the melancholy lead Clayton (Dylan Minnette) still wrangling with the guilt over friend Hannah Baker’s suicide, and facing a police investigation over the murder of school bully Bryce. The show toys with the whodunnit formula in an already scarred high school as it tries to move away from the conspiratorial drama of the first two seasons. Will it work? One way to find out…

The campy 80s sitcom lands on Hulu this week, bringing with it a treasure trove of southern belle zingers. For the uninitiated (and we know a few of you do exist) Dixie Carter, Annie Potts, Delta Burke and Jean Smart star as four women running an interior design business together in Atlanta, Georgia, and cope with sexism, aging and troubles with men. The show is worth watching for three reasons: one, it’s damn funny. Two, to find out what happened “the night the lights went out in Georgia.” And three, to prime for reading about all the ridiculous behind-the-scenes drama that doomed the series.

The Commemorative: Making The Boys

The Boys in the Band playwright Mart Crowley turns 84 this week. As such, we recommend this documentary look at his life, and his seminal work. The Boys in the Band is not a movie that ages well; today it plays more like a treatise on self-loathing and homophobia than anything else. Making the Boys, however, provides important context for the creation of the play and subsequent film, its cultural impact, and just why it doesn’t hold up today. As a bonus, the doc also includes Crowley’s home movies of parties at Roddy McDowell’s beach house, and feature him hobnobbing with friends Natalie Wood, Robert Wagner, Judy Garland, Tuesday Weld and Julie Andrews.

The OG: The Dark Crystal

Ok, so it’s not queer, exactly, but for so many of us of a certain age, The Muppets provided a moral compass to celebrate diversity, uniqueness, creativity, chosen family and the courage to be ourselves. Muppet creator Jim Henson crafted his masterwork in The Dark Crystal—a dark, hallucinatory sci-fi/fantasy film that, to this day, remains the only film performed with an all-puppet cast. Taking inspiration from Lord of the Rings and Grimm’s fairy tales, the story follows an elf-like Gelfling on a quest to free his world from the tyranny of the evil Skeksis, a race of reptilian beasts. For viewers who can get past the sheer weirdness of it all, The Dark Crystal offers a reward in the form of an artistic treasure and as an overlooked classic. So why watch it now? Check back with us next week…

The Sip: The Rocketman 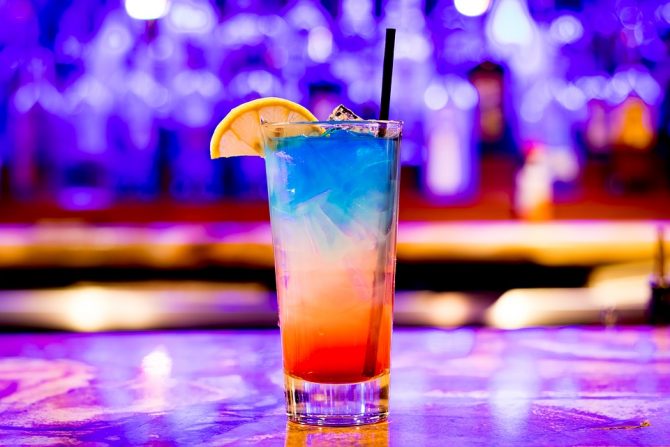 Since we just know you’ll want to sing along to the Rocketman soundtrack–and since some of you will no doubt need a bit of lubrication to do so–this week we offer The Rocketman, a fruity vodka beverage designed to fire your thrusters.

Pour grenadine into glass with ice. Carefully pour water over the top. Mix Curaçao and vodka in a glass and pour over grenadine to create a layered effect. Serve.