Director Don Hahn (Waking Sleeping Beauty) helms this beautiful documentary of a queer artist, and a dear friend. Howard recounts the life and career of Howard Ashman, the writer/lyricist behind The Little Mermaid, Little Shop of Horrors, Aladdin and Beauty and the Beast, and how life as a gay man in the 1980s influenced his work. Featuring interviews with Ashman’s family, his longtime partner Bill Lauch, and various collaborators including composer Howard Ashman, producer Jeffery Katzenberg and actress Jodi Benson (the voice of Ariel), Hahn paints a portrait of Ashman as a complicated, proud queer man. He also doesn’t hesitate to recount Ashman’s notorious tantrums which often left said collaborators in horrified shock. Most of all, Hahn argues that the world lost a titan when Ashman succumbed to AIDS in 1991, that we could have enjoyed another two decades of songs on par with “Suddenly Seymour,” “Part of Your World” and “Beauty and the Beast.” Having seen the film, we whole-heartedly agree.

Fans of The Amazing Race, strongman competitions and possibly masochism should check out World’s Toughest Race: Eco-Challenge Fiji, which debuts on Amazon this week. 60 teams compete for glory as the trek on foot across the titular island in a no-holds-barred life in the wild race. Of particular note: the American Team Onyx, the first all-African-American team in the show’s history, which also happens to feature out-gay pro runner Coree Wolterling. We thought we might get malaria just from watching some of the conditions Woltering & co. subject themselves to. Suffice it to say, the show more than held our attention. You’ll likely find yourself hooked.

This new digital series explores the world of dating and sexual fluidity in the age of smartphones and hook-ups. Actress Summer Spiro plays Olive, a young lesbian on the hunt for love, along with her straight best friend Billy (Ryan King). As the pair commiserate over their dating woes, both begin to explore their own sexuality in new ways in hopes of finding the line between platonic love, and full-blown romance. Yes, that includes some fluid encounters with different genders. Thoughtful and sensitive, Platonic never outstays its welcome; most episodes run about five minutes or less. Nevertheless, it left us with a lot to contemplate.

The Exclusive: Nick McCoppin’s “For Years”

We continue to swoon over the music of gay pop star Nicolas McCoppin, who graced us with a new track last month. Now we’ve landed an exclusive on his latest single, “For Years.” The new song, as with much of McCoppin’s work, meditates on young love, the excitement of meeting someone new, and the flood of hope that comes with both. Musically, McCoppin channels the work of Drake, Ariana Grande and a hint of early Miley Cyrus. With a pounding electro beat, the song seems ready for dancefloor revels.

For anyone who loved Murder, She Wrote, watched it stoned or wondered what Angela Lansbury’s amateur detective would be like while high, the new Quibi comedy Mapleworth Murders checks each box. Paula Pell stars as a busybody mystery writer solving bizarre murders in a small town. No doubt fans of Murder, She Wrote should find that premise familiar. Unlike that show, however, Mapleworth Murders realizes the silliness of its premise and leans into the kookiness of its main character. It also includes a hearty dose of lesbian sexual tension, which only adds to the silliness of it all. Pell, of course, is irresistible, and guest stars this season include Maya Rudolph, Fred Armisen, Jack McBrayer, Wanda Sykes and Patton Oswalt. The cast and the absurdity makes this bite-sized series perfect for the TV munchies.

Queer popper Tom Goss returns this week with his latest video, a tribute to all things nerdy and all things bearish. As with so much of Goss’ work, “Nerdy Bear” revels in its love of full-figured men, albeit this time with no shortage of in-jokes related to video games, fantasy movies or role-playing games. With a sensual beat, we have a feeling plenty of big boys—and the men who love them—will enjoy spinning this track in the bear cave.

The Sip: The Little Mermaid 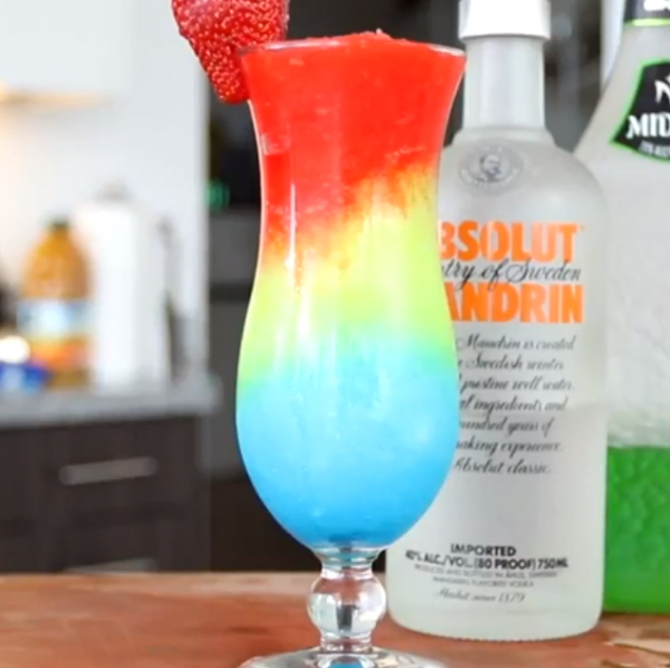 In honor of Howard Ashman and his contribution to the American songbook–not to mention our childhoods–we offer up this fruity, iced layer drink so named for the Disney animated classic. It takes some extra work for sure, but much like Ariel’s legs, it’s worth the effort.