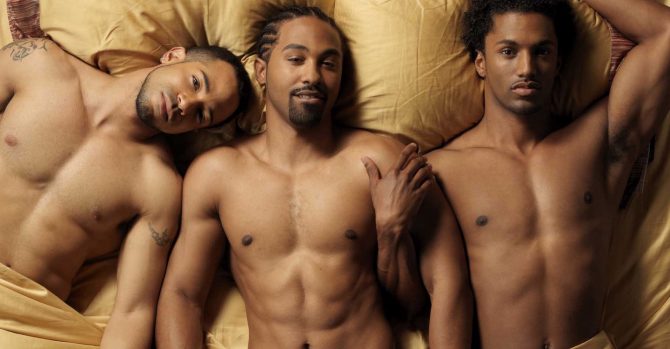 The enchanting Sundance doc arrives on Netflix this week, in all its sequined glory. Mucho Mucho Amor details the life and career of Walter Mercado, the sort of Spanish language equivalent to Miss Cleo or Sylvia Browne. Unlike those TV personalities, however, Mercado had a career that spanned almost 50 years. During that time, he lived openly as a sexually and gender-fluid celebrity—and endured all the jokes that came with it. Mucho Mucho Amor celebrates Mercado’s unapologetic authenticity and the greatest love of his life: his audience. Less a psychic than a life coach and motivational speaker, we confess, we’ve fallen for him too.

The beloved, first-of-its-kind sitcom returns, this time as a live reading featuring the original cast. The ‘Rona Chronicles, written and directed by series creator Patrik-Ian Polk, finds Noah, Alex, Rodney and Chance enduring the COVID-19 pandemic, taking part in the Black Lives Matter protests and ruminating on how queer live has changed since Noah got married in 2008. More than that, we can’t divulge here, though we can add that Queer Eye’s Karomo Brown will host a special live Q&A following the reading to raise funds for black LGBTQ charities.

The Anticipated: Hamilton on Disney +

Though Disney+ has marketed this Hamilton as a movie version of the Pulitzer Prize-winning Broadway smash, this film isn’t an adaption; rather, it’s a recorded version of the play featuring the original Broadway cast. That should delight fans who have seen the show on stage, or become addicted to the original cast recording. We confess to coming into the film cold, which left us frustrated. The fusion of a concert, Brechtian staging and a vaudeville would make for an amazing evening of theatre, doesn’t translate well to the screen. Perhaps because of the concert format, and because so many of the songs aren’t “scenes” in the traditional sense, the plot also becomes difficult to follow in places. That said, seeing Lin-Manuel Miranda, Leslie Odom, Jr., Jonathan Groff and the rest of the cast flex, sweat and belt their way through song after song is very entertaining. Still, to experience the show at its best, see it in the room where it happened. (See what we did there?)

Fresh from his stint performing at Global Pride, queer singer Bright Light, Bright Light drops his latest single this week, a campy summer song with a retro-MTV style video to boot. Moreover, the funky 70s beat channels the best of the disco era, and puts us in the mood for some sun, a pool and someone beautiful in a revealing swimsuit. Since COVID-19 will circumvent that, we’ll just rewatch the video’s bathtub scene (you’ll know when it happens). A few times, in fact.

Anyone who still can’t get enough Drag Race glamour or shade, take heed: Canada’s Drag Race, the northern neighbor’s spinoff of the American version, arrives this week. Expect the Snatch Game, the read, untucked sessions and the usual buffet of Drag Race fashion and wit. Guest judges this season include Michelle Visage, Amanda Brugel, Deborah Cox, and Allie X, so pour a tall one and get ready to werk.

Streams July 2 on WOW Presents Plus.

The Revealing: Putting On: Season 2

The Revry reality series following Israeli underwear model On Mekahel returns this week, with six new episodes following the drama (and there’s plenty) of his life. This season finds On engaged to a new boyfriend, jet-setting around the world with his new underwear line, and navigating the American legal system alongside his fiance. Expect usual reality show nincompoopery, but with a very queer twist. Oh, and a lot of good looking men in underwear…so there’s that.

The Talk: The Take On

For anybody interested in continuing or getting brought up to speed on the ongoing protests against police brutality, the Black Lives Matter movement, and how said elements affect LGBTQ life, take note of The Take On, a new podcast hosted by queer Muslim activist Amir Yassai. Announced guests for the season include Jai Rodriguez of Queer Eye, We’re Here’s Eureka O’Hara, and Drag Race alum Mayhem Miller. It’s a light-hearted discussion of very serious and personal issues, and one very relevant to our times.

In honor of the debut of Hamilton, which features a hurricane in the plot–and, for that matter, will no doubt cause a hurricane on social media–we offer up this Southern classic. Fruity and potent, you’ll feel like you’re actually in a hurricane.

Mix ingredients in a shaker over ice. Strain into a glass over ice and serve.