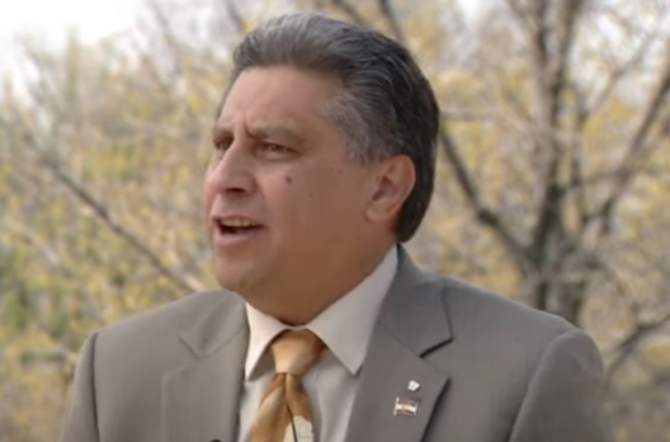 Lopez made the clearly homophobic remark at a campaign rally, and the crowd ate it up. If you want a masterclass in political maneuvering, you certainly won’t find one watching Lopez bumble his way through a defense when pressed by reporter Kyle Clark of 9News.

“Why choose to introduce homophobia into the race for governor?” Clark asked.

“It’s interesting that you would even mention that word, because I didn’t use it,” Lopez responded, because if there’s one thing we know about homophobes, it’s that they’re always using the word “homophobia.” Lopez said all he meant was that his wife “will work very hard on issues that pertain to women and children,” adding some feigned shock that folks would “twist” his words.

Clark was not amused.

“And I’m asking you why introduce that into the race? You’ve got plenty of critiques of the governor, other than the fact that he’s a gay man.”

Lopez again denied the remark was homophobic, and accused Clark of misleading his audience.

“I don’t think you can keep a straight face as you say that,” Clark said. “Would you have an issue with [GOP primary candidate] Heidi Genahl’s husband being the first gentleman?”

Related: Lindsey Graham is suddenly very concerned about the integrity of our institutions after SCOTUS leak

“You’re not understanding the system,” Lopez responded. “I’m talking about having a female that’s gonna focus on women’s issues and children’s issues.”

And speaking of “women’s issues and children’s issues,” elsewhere in the interview, Lopez reasserted his anti-abortion stance and brushed off a question about his 1993 arrest for violently assaulting his then-pregnant wife, Lisa.

“First of all, it wasn’t a violent situation,” Lopez said. “There’s only been one perfect man who’s ever walked this Earth and we nailed him to the cross. I’m not a perfect man and I’ve made my mistakes but I’ve learned from them.”

Watch — the back-and-forth about the “first lady” comment starts at the 17-minute mark: