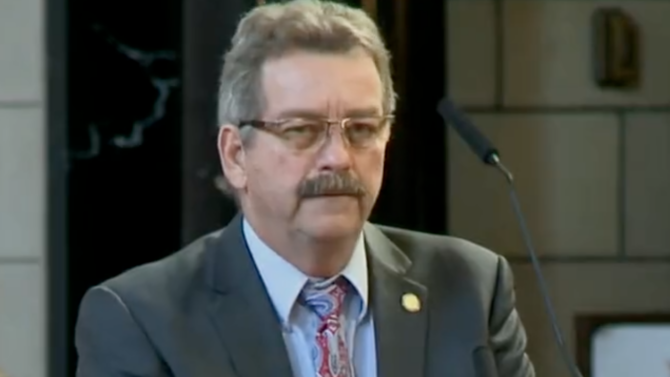 One-upping every conspiracy theory-prone uncle out there, Republican state Senator Bruce Bostelman used his time during a debate over a Nebraska school funding bill to rail against the real issue facing classrooms: furries.

“If you don’t know what furries are,” Bostelman began his floor speech, before giving perhaps the worst definition imaginable.

“It’s where school children dress up as animals — cats or dogs — during the school day. They ‘meow’ and they ‘bark,’ and they interact with the school and the teachers in this fashion,” he said.

But it gets even worse, according to Bostelman.

He continued: “And now schools are wanting to put litter boxes in the schools for these children to use. How is this sanitary?!”

A floor speech from Nebraska State Senator Bruce Bostelman that "is about something called furries."

“I think it’s very disruptive in the school system,” Bostelman argued. And he’d no doubt be right… if anything he said was even remotely based in reality.

Oh, but theres more. “I even heard from one person recently who said that a student identified as a cat and wanted a litter box, and the school didn’t provide the litter box, so the student went ahead and defecated on the floor. Really. Really,” he said.

Bostelman is the latest conservative state lawmaker to be duped by discredited rumors of school children identifying as “furries” and demanding litter boxes. The rumors started spreading in Michigan late last year, and it’s not hard to see how they could be used to fuel ignorant, parental outrage in the ongoing attacks on transgender students or perceived “wokeness” run amok.

Facing immediate criticism, the senator backtracked hours after the debate and admitted his accusations were false.

“It was just something I felt that if this really was happening, we needed to address it and address it quickly,” Bostelman said, according to the Associated Press.

Here’s what some folks are saying in response:

Or kitten you, in this case

This guy identifies as gullible.

I’m really seeing this as backlash since we stand for LGBTQ+ rights/anti-racism, in an attempt to dehumanize us to try to silence us because of that. They’re playing to the voters that will believe anything they’re told, especially if it’s something they’re not familiar with.

Wait until he hears on FB that birds aren’t real.

man i bet his browser history is wild