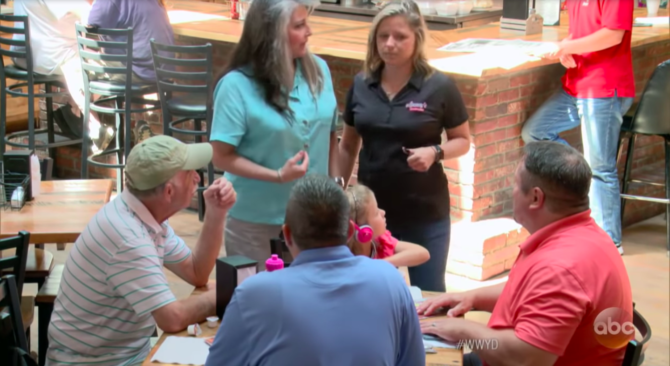 In the latest episode of ABC’s What Would You Do?, a gay couple and their child find themselves the targets of antigay abuse while innocent bystanders look on in disbelief.

In both places, a woman harasses a gay couple having lunch at a restaurant with their young daughter, telling them she disagrees with their “lifestyle.” And in both places, an overwhelming majority of customers stood up for the couple.

“Lady, are you nuts or something?” one man in Kentucky asks her. “We didn’t come here to be annoyed by you!”

In part two, one New York customer becomes so infuriated by the harasser, that he actually snaps.

“My wife was raised by two women,” he says. “It’s still love for the child and that’s all that f*cking matters. You got a problem with that, f*cking leave!”

Meanwhile, back in Kentucky, the entire restaurant rallies behind the gay couple and breaks out into applause when the harasser storms out of the establishment in a huff.

Related: Father comes out to son inside a crowded restaurant, what happens next may surprise you