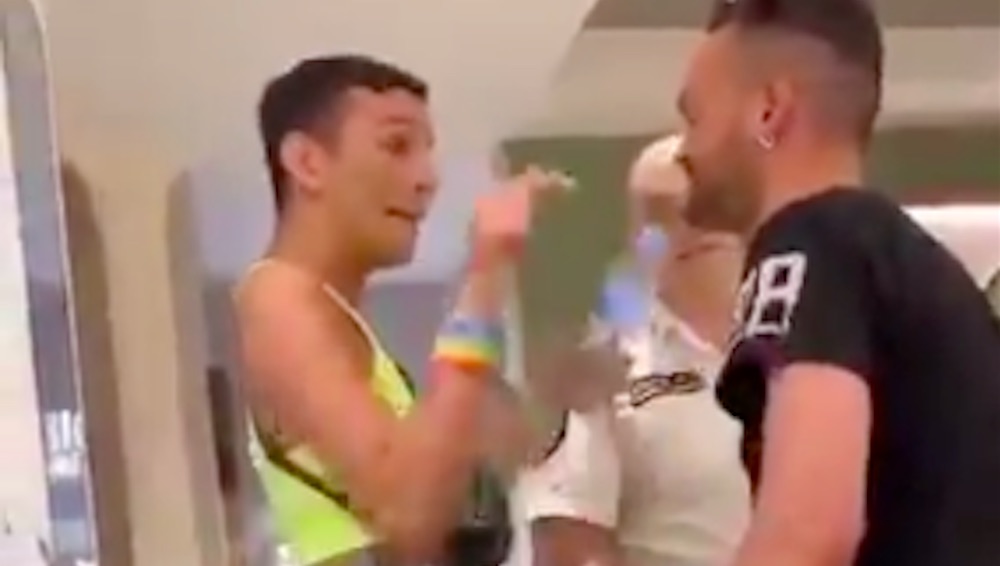 There’s a sad anecdote that circulates every Pride of an NYC subway passenger who sees fellow queers removing their rainbow gear on their ways home because they’re afraid of getting harassed away from the parade. The story is apocryphal, but it conveys a truth: It’s not always safe to express your queerness in public.

Take this incident for example…

In a video recorded in a McDonald’s during Pride weekend in Barcelona, Spain this last Friday, a man in a neon yellow tank top, short cut-off jean shorts and sneakers was harassed by a presumably hetero hater with a fauxhawk. The hater tells the man, “I’m going to beat you till you become heterosexual.”

According to Gay Star News:

“The homophobe expressed that he ‘didn’t agree’ with the ensemble, and told him that it was ‘disrespectful’ to be dressed ‘like that’ in public.

‘I really have to put up with a guy telling me that I can’t dress like this?’ the victim complained to the security man in the clip. Flagging that is it ‘Gay Pride Day.’

Moreover, the man replied: ‘I don’t care what day it is, it is also a good day to punch you. Do you want to see?’ …

‘When you go out, I am going to hit you so hard your queerness will disappear.’”

The person recording the video eventually intervened and police arrived soon after, though the harassed man opted not to press charges.

Here is video of the incident:

The Spanish accompanying the tweet above reads: “Today my friend has suffered an attack at a McDonald’s in Barcelona for his way of dressing so “feminine”. It is ironic that this happens the same day as the proclamation of pride but we must continue fighting to end these acts and these people.”

Related: Hungry? A nude restaurant just opened in Spain, where you can nibble snacks off male models

The city’s Pride organization also spoke out against the incident, urging the harassed man to file an official report so that his incident doesn’t go forgotten.