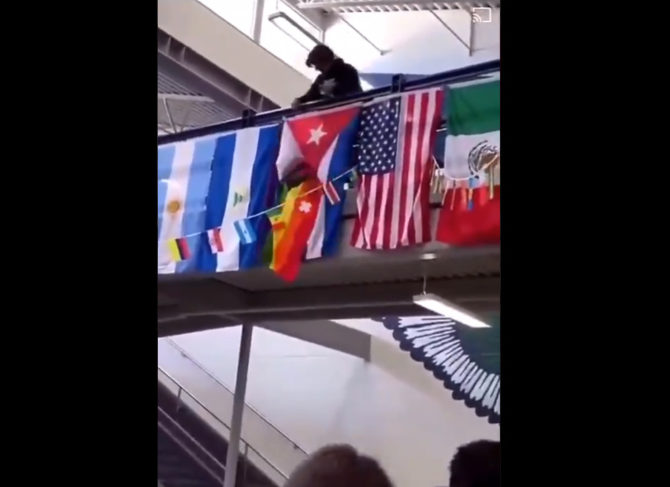 Video from a Utah high school has gone viral showing a student there cutting down the pride flag amid cheers from his classmates.

The incident happened at Ridgeline High School in Millville, according to The Salt Lake Tribune. The school had hung the Progress Pride Flag–a recent variation that combines the colors of the Transgender Flag, as well as black and brown stripes to represent people of color–along a catwalk just above the school commons. The flag hung alongside several other flags signifying different nationalities as part of the school’s Diversity Week. The school had intended to display the flags only temporarily; the pride flag, along with all the international flags, would have been taken down at the end of the week.

The video shows a male student walking along the catwalk where he uses a sharp object–which looks like a knife–to cut the flag down from the display. A fellow student in the crowd yells “Hurry the f*ck up!” as he does so. As the flag falls, the student body erupts in cheers.

School officials at Ridgeline High have confirmed that the incident occurred on Tuesday, April 20, Day 2 of the school’s diversity week.

This is disgusting and heartbreaking. The amount of kids cheering when the Pride flag gets cut down is sickening. Embarrassing moment for Utahns and Ridgeline High School. Be better. ????????? #ridgelinehighschool pic.twitter.com/zD1zrr7ZuD

“It was put up specifically for that event,” Cache County School District spokesperson Tim Smith noted. “And neither the school nor the school district condones the insensitive and disrespectful removal of the flag, which was done without permission.”

Predictably, the school’s LGBTQ students interpreted the act as one of hostility, and now feel unsafe to return to class.

“This felt like a direct message that our student body does not support or respect us,” one student told Susie Augenstein, a former teacher at the school. Augenstein confirmed to the Salt Lake Tribune that a queer student had sent her the video, along with the comment.

Tim Smith, meanwhile, assured the public that the school would take steps to make sure queer students didn’t feel threatened.

“We’ve been talking to those students this morning to make sure they feel OK and like it’s a good environment for them to return to,” he said.

In an additional statement released to the press, Smith said, “Neither the school nor the school district condones the insensitive and disrespectful removal of the flag, which was done without permission. In fact, this took place during Ridgeline’s Diversity Week, which is held with the intention to create awareness and celebrate the diversity of students, as well as increase inclusion among the Ridgeline student body.”

“This type of incident reminds us of the importance of continually educating students, not just during a Diversity Week, on the importance of respecting one another and the right to attend school, participate in events, and learn in a safe and respectful school environment,” he further noted.

At the time of this writing, the school has not identified the student that defiled the flag, nor has it shared what disciplinary steps it intends to take. The desecration of the pride flag at Ridgeline High comes as several states have introduced or passed into law several bills that target queer students, in particular, transgender people in athletics.