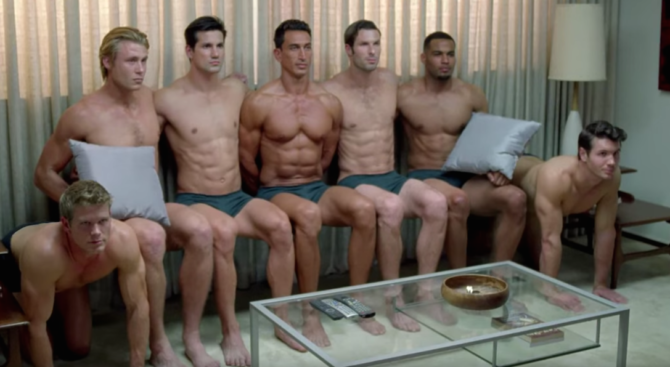 The Super Bowl is an annual celebration of the best teams and, especially, advertising. At least those willing and able to shell out $5 million for 30 seconds this year. And every year for over a decade, there have been some great and not-so-great LGBTQ themed ads.

Since many of us are more interested in the ads than the actual game, check these out if all that football stuff is just too boring!

Two outstanding ads debuted on last year’s big game, from Mini Cooper and Axe. Mini Cooper broke ground as the first advertiser to use the word “gay” in a Super Bowl commercial, or in TV advertising in general.

This car defies derogatory labels by confronting all the things people call it – and their drivers. Featuring tennis star Serena Williams and retired lesbian soccer player Abby Wambach, who says in air quotes, “This is a ‘gay car.’ ”

“This car doesn’t care what you call it,” Harvey Keitel says with attitude at the end.

Focusing on the things that make each young man unique, rather then trying to become the idealized man, Axe pokes fun of advertising clichés and redefines traditional notions of masculinity in its spot. It includes a Paris Is Burning style vogue-ing competition and asks, who needs fire “when you rock those heels?”

Coca-Cola courted controversy two years back when it featured the song “America the Beautiful” – sung in various languages including Spanish, Tagalog, Hindi, Senegalese French and Hebrew. Almost unnoticed was a male couple skating together with their daughter.

A variety of wacky re-inventions are shown, including a re-invented couch that is made up of seven hot women — or seven shirtless (and hairless) men. As the owner walks into the living room and looks at the “couch,” he seems equally happy with either version.

An attractive man walks down the street, sipping a Diet Pepsi to the tune of the Bee Gee’s “Stayin’ Alive” from Saturday Night Fever. He has no idea that everyone is staring at him. Supermodel Cindy Crawford (who once appeared in other Pepsi ads herself) takes off her sunglasses to get a better look at him, and then Carson Kressley, from Queer Eye for the Straight Guy, turns to look him up-and-down too. Kressley’s jaw drops in awe.

A driver barrels down a dark road, narrowly passing a deer, then bizarrely Alice Cooper with a snake, and then finally Richard Simmons doing a workout. The driver angrily grabs the steering wheel and floors the accelerator to run down Simmons – who screams in fear — but misses him too. Why does Bridgestone want to run anyone down, let alone our famously sissy star?

Two mechanics are working under the hood of a car when one starts chomping a Snickers hands-free, like it’s an oversized spaghetti noodle from Lady and The Tramp. The other mechanic then starts to bite the other end for an inevitable meeting of the lips mid-Snickers. Stunned, the two men step far away from each other, and one says, “I think we just accidentally kissed.” The other responds, “Quick! Do something manly!” One clubs the other in the gut with a long wrench, then the other mechanic slams the hood of the car over his torso. There are three alternate – and violent – versions, plus one where another mechanic asks, “Is there room for three in this love boat?”

Once again, the advertiser uses brutality and homophobia as a way of selling.

This tongue-in-cheek ad, meant to be the fantasy of men — literally — shows two women in business suits eating lunch when they start arguing about whether the beer tastes great or is less filling (recalling the classic argument of ads past). They immediately pull each others’ clothes off and wrestle with bras and panties exposed. The scene is interrupted by two men sitting in a bar saying, “Now that would make a great commercial!” The other chimes in, “Who wouldn’t want to watch that?” Their two girlfriends sit with baffled looks. The ad closes with one woman saying, “Let’s make out!”

Following a parade, a man walks into a bar in a clown suit made to look like he’s walking upside-down, on his hands. He orders a beer and drinks it as others in the bar look on in puzzlement, tilting their heads to watch as he apparently “drinks” through the suit’s upturned rear — probably looking something like giving himself an enema. The camera is spared this image, but he turns around cluelessly and asks, “What?” The clown leans in and asks the bartender for a hotdog from the menu, to which the bartender sternly replies, ” I don’t think so.”

The humor here is all in the sodomy references.

A leggy woman arrives at her high school class reunion and everyone turns to look as she slinks down the stairs and across the room. The narrator ticks off the money she spent on plastic surgery: “New nose $6,000; lips $3,000, new chest $8,000.” The woman is stopped by an obnoxious guy who thinks he recognizes her and he says, “Ahhh, don’t tell me, I never forget a face…” The narrator continues, “It’s amazing the changes you can make for a few thousand dollars.” Then a look of horror crosses the guy’s face as he realizes and says, “Bob? Bob Johnson?” With a wicked smile, the woman says, “Hi Tom!”

While the transgender woman is beautiful, the supposed humor is in the horror of Tom’s face and his rejection.