The Catch: The Plot Against America

Philip Roth’s celebrated alternate history novel finally gets the miniseries treatment, with a cast headed by Winona Ryder and Jon Turturro. The Plot Against America uses blends actual history with the imagined, as Charles Lindbergh makes a successful run for the Presidency, defeating Franklin Rosevelt. Anyone familiar with Lindbergh’s personal life knows the man had Nazi sympathies. This story postulates what history could have looked like with a celebrity fascist in the White House. Lindbergh’s discrimination and persecution of Jewish Americans begins, even as his supporters scramble to make the “he’s not antisemitic” argument. If that last bit doesn’t sound familiar to LGBTQ people…please get out of the house more. Well-acted and directed, The Plot Against America channels both alternate history and current history so well, it’s chilling as Hell.

Netflix brings this magnificently queer series to the data stream this week, based on the life and comedy of lesbian comic Mae Martin. The show centers on the fictional Mae (played by Martin herself), as she tries her hand at stand-up comedy in London. When she meets a beautiful young consort, Mae has to struggle with her buried insecurities and newfound sobriety. Lisa Kudrow also stars as Mae’s neurotic mother. Like so many comedies that focus on addiction, Feel Good has some very big laughs, and a few bitter pills to swallow. In this case, the sweetness is worth the pain.

We caught this thriller on the festival circuit last year. It lands on Netflix this week. Last Ferry follows Rafael (played by the handsome Miles Clohessey), a young lawyer who runs off to Fire Island on a spontaneous exploration of his own sexuality. After witnessing a murder, Rafael takes refuge with a group of friendly gays…only to discover the killer in their midst. Last Ferry revels in tension, both sexual and psychological, as Rafael wrestles with his attraction to queer life…and maaaaybe a tiny attraction to a murderer. As the thirst for LGBTQ-themed horror continues, Last Ferry answers the siren call with some very sexy scares. We wouldn’t have it any other way.

The Nibbles: These Thems

Comedienne Gretchen Wylder brings her acclaimed digital series from the festival circuit to the web, with a pivotal new episode streaming this week. These Thems focuses on queer femme culture, with the ever-hilarious Wylder (who also plays a character named Gretchen) exploring the world of trans-nonbinary dating. What happens when a trans man comes out to his male lover? Has anything changed? Is it possible to take it all in stride? Wylder and her show don’t have easy answers, though fortunately, they both have a great sense of humor about it all.

Streams on TheseThems.com and OML. New episodes post every Thursday.

We’ve nursed a crush on the gay crooner Wrabel since we interviewed him two years ago. His first single off his new album, “Hurts Like Hell,” has already landed him a spot on The Today Show, and built up anticipation for the EP’s release. In short, we’re smitten again. Wrabel’s vocals channel the likes of Sam Smith (who we also love), though we find Wrabel’s lyrics a bit more soulful, and homoerotic. With Wrabel poised to finally have a break-out hit, we encourage our readers to have a listen now, and land ahead of the curve. 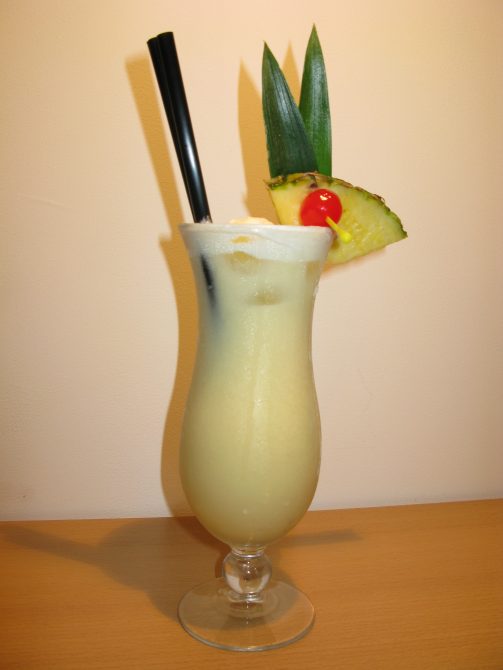 In honor of Last Ferry, as well as Joel Kim Booster’s forthcoming new sitcom set on Fire Island, this week we suggest sipping on a Rocket Fuel, the signature cocktail of Fire Island. Blending tropical, fruity flavors with some very strong liquor, you’ll feel like you’ve blasted off too.

Blend ingredients with ice in a blender until smooth. Serve with a cherry.