The Hilarity: Julia Scotti-Funny That Way

We fell in love with the humor—and the woman herself—of Julia Scotti, the transgender stand-up comic who’s found renewed success on the comedy stage post-transition at age 65! Funny That Way retells the life and comeback of the woman in question: how she began as a male stand-up comic in the 80s and 90s, before her struggle with gender identity forced her into retirement, destroyed her marriage, and forced her estrangement from her two children. Scotti’s good humor and optimism offset the film’s darker elements, including one scary twist nobody saw coming. We have a feeling viewers will come away with an affection for Scotti just as we did; she is the queer granny we didn’t know we needed.

The Harrowing: The Right Girls

Journalist and filmmaker Tim Wolfer directs this new documentary, shot during the notorious 2018 migrant caravan. Wolfer joins a group of young, transgender women making the 2,200-mile trek from southern Mexico to the US border by hitching rides and on foot. Along the way, they form tight bonds of sisterhood and endure some frightening incidences of harassment from their fellow migrants. The film humanizes the migrant crisis from a political football to personal stories of queer people coming to the United States as if their lives depended on it…probably because they do. Timely and moving, we’ve never seen a story quite like this.

Director Sal Bardo celebrates the 10 year anniversary of his popular short film Requited this month. As such, he’s rereleased the film on YouTube fore a new generation to enjoy. Requited tells the story of a young gay man living in New York and facing an uncomfortable choice: either see his boyfriend off to the airport, or say goodbye forever to his first love. Thoughtful and very sexually aware, the movie also knows that letting go of the past is often a choice, though not one easily made. Does that make the protagonist a romantic or just plain pathetic? You decide.

Animation fans who find Family Guy and American Dad tired should check out Star Trek: Lower Decks, the new animated series in the famed franchise. Lower Decks takes the unusual step of treating Star Trek as full-blown comedy, lampooning the series’ 50-year history of aliens and technobabble…not to mention a few preexisting parodies out there. A show like this really shouldn’t work, but the animated style somehow gives it the elasticity it needs to keep the jokes coming at warp speed. Plus, with all the other Trek and Star Wars shows on hiatus, we could go for a little sci-fi snack at the moment.

Queer Canadian musician graced us with this hot remix of the Lady Gaga single this week, and men missing their days of wine, roses and circuit parties should welcome it with open arms. The Velvet Code remix (we do love that title) adds a harder baseline to the track, making it over into a full on EDM/trance song ready-made for smoke machines, colored lights and club dancefloors. Rumor has it Velvet Code wants to start his own record label for queer artists too, so keep his name in mind. You’ll likely hear it again. 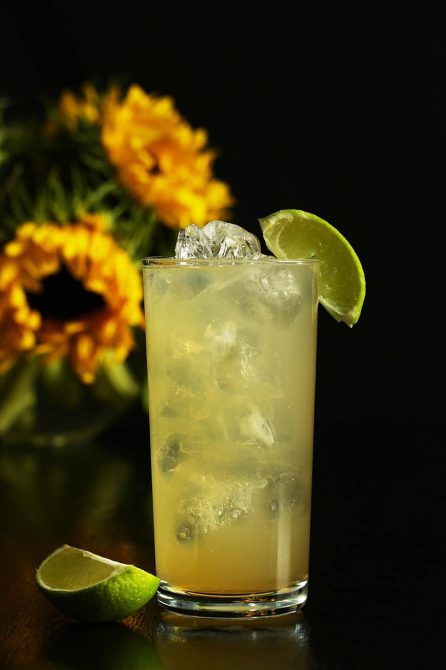 In recognition of Velvet Code’s new remix of the Gaga track, why not sip on the sweet & sour flavors of this libation? Think of it as a lime margarita with a slightly sweeter twist.

Mix in a cocktail shaker over ice. Shake well and serve. For a little extra fun, use some Sour Patch Kids as a garnish.