The Awaited: Before You Know It

This Sundance indie charmed us at the festival earlier this year. Now, after playing select screenings around the country, it opens wide. Before You Know It centers on sisters Rachel & Jackie (played by co-writers Hannah Pearl Utt & Jen Tullock) as they struggle with the untimely death of their thespian father (Mandy Patinkin). In order to save the family business, they must track down the mother they never knew they had, played by queer icon & activist Judith Light. Amid the chaos, the sisters also struggle with romance, women for Rachel, men for Jackie. Utt, who also directs, gets hilarious performances from her cast in a comedy about being part of a family, and all the crazy that entails.

At long bloody last, the prequel series 35 years in the making comes to Netflix. The Dark Crystal: Age of Resistance revives the creepy fantasy universe created by Jim Henson in 1982’s The Dark Crystal, continuing the tradition of an all-puppet cast, and that of scaring the bejesus out of the audience. In short, Age of Resistance is a triumph, featuring the most lifelike puppets ever created, and possibly the most visually lush universe to ever hit the small screen. Taron Egerton leads an all-star voice cast, which also features Harvey Fierstein and Mark Hamill in scene-stealing roles. Finally, given that a same-sex couple (with a major twist) shows up later in the season, we can’t recommend it enough. That the show is downright frightening at times—disturbingly so—wasn’t enough to stop us from binging what amounts to a 10-hour movie. Have snacks on hand!

Movies have covered the life of bisexual writer Virginia Woolf before—most notably in The Hours, for which Nicole Kidman scored an Oscar. Vita & Virginia examines Woolf’s primary same-sex relationship—that with writer Vita Sackville-West—in a new level of depth. Gemma Arterton and Elizabeth Debicki star in the title roles, and give strong performances that match each other step for step: Arterton as the vivacious Vita, and Debicki as the mentally crumbling Woolf.

Already binged the new season of Queer Eye? Try this new, hastily assembled Netflix series starring gay style power couple Jason Bolden and Adair Curtis. Together the pair run the JSN Studio, a fashion and interior design consulting firm whose clients include Vanessa Hudgens, Taraji P. Henson, Alicia Keys and Ryan Coogler. Styling Hollywood takes the Queer Eye premise to the next level, mixing all the anxieties of a makeover with the perils of domestic life.

Smartphones and similar technology have taken on a huge role in day-to-day life, especially for queer people who can’t get enough of their dating apps like Grindr. Couples Therapy takes the app obsession to the next logical conclusion…when an app becomes a relationship counselor for a gay couple. As you can guess, things go hilariously wrong for the pair. At only four and a half minutes, Couples Therapy extends its premise about as long as it should, and announces writer/star Eduardo Sanchez-Ubanell as a comedic mind to watch.

How’s this for a premise? A 20-something gay addict struggles to put his life back together after, and resorts to selling marijuana to make a living. It could be an HBO series…if it didn’t actually happen. Author Jackson Tilley tells all on his struggles with substance, sexuality and the cannabis industry in his new memoir Billion Dollar Dimebag. In his lively writing style, Tilley explains all the behind-the-scenes workings of the semi-legalized marijuana trade, as well as how a move toward full legalization can help combat everything from a slowing economy to the opioid crisis. For anyone with even a passing interest in cannabis—or the debate surrounding legalization—Billion Dollar Dimebag will stoke the passion for a national reckoning.

The Sip: The Virginia Woolf 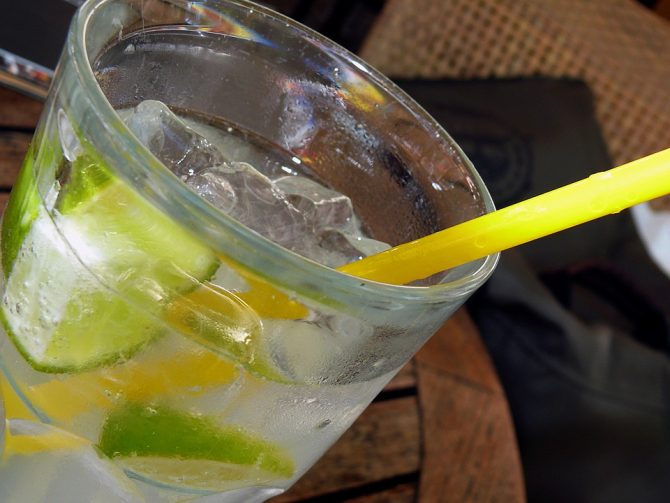 Keeping with the theme set by Vita & Virginia, this week we offer a sweet-tart gin libation named for the literary giant. It may not have you rushing out to read Mrs. Dalloway, but it should get you in a chatty enough mood to go talk to the cute guy at the end of the bar…or at least get flirty on Grindr.

Mix gin & lemonade over ice in a tall galss. Stir. Garnish with lime.