The Inevitable: Star Wars – The Rise of Skywalker

The Skywalker saga, which has spanned more than 40 years and three film trilogies finally comes to an end…allegedly. We’ve heard that line before. In any case, this finale of finales is the most uneven Star Wars outing since Attack of the Clones. It plays like a Jackson Pollack hodgepodge of plots, characters, special effects, and pathetic fan service. Some of it is pretty great: Daisy Ridley commands in her grand heroine role, a lightsaber fight in the ruins of the Death Star makes the heart pound, and the movie does feature the first on-screen same-sex kiss in the saga’s history. It’s also a pleasure to see Carrie Fisher’s Jedi master Leia one last time. On the other hand, Rise of Skywalker has too many characters, plots, dubious coincidences, reversals, and retcons for its own good. Characters like Maz, Rose, Lando, and even the Emperor are wasted, a death meant to serve as the film’s emotional climax got laughs at the screening we saw. The film also indulges so many fan theories that the story feels like it was workshopped on Reddit. All that said, it’s worth seeing once, if for no other reason but to wish for a new hope to revive a series that used to be fun, but now feels oh so tired.

If lightsabers and space battles don’t trip your trigger, go see the other CGI behemoth this weekend: Andrew Lloyd Weber’s Cats. Of course, Cats on stage has endured many of the same criticisms that Rise of Skywalker is now getting: too many characters, too much spectacle, not enough substance. Here’s hoping that Academy Award-winning director Tom Hooper and a cast that includes Judi Dench, Ian McKellen, Idris Elba, Jason Derulo, Taylor Swift and James Corden can bring some lucidity for the proceedings. If nothing else, we long to savor Jennifer Hudson’s thundering rendition of “Memory,” the song that helped Cats become the longest-running musical in Broadway history at one point. We’re not sure Cats really called out for the cinematic treatment, especially in motion-capture form. Then again, that also means we get to see individual songs pop up on YouTube at showtunes night at the bar. We may need a drink to get through it.

The Stream: The Two Popes

Anyone wanting to avoid the crazy holiday blockbusters at the multiplex this weekend—or just craving something a bit more adult—look no further than The Two Popes. As directed by Fernando Meirelles (The Constant Gardner), the film fictionalizes a meeting between the hyper-conservative Pope Benedict XVI (Anthony Hopkins) and Cardinal Jorge Bergoglio, who would go on to become Pope Francis after Benedict’s resignation. It’s a thoughtful and empathetic look at a church too old to understand the modern age, and too vital to history to fold. What could have been a dull & dry affair is elevated by some beautiful scenery and the film’s leads. Pryce gives one of the year’s best performances as Pope Francis, and Hopkins captures the Sith like cool of Benedict.

The Binge: The Morning Show

The finale of AppleTV’s The Morning Show arrives this week, and we’d like to think ourselves fashionably late to the party. The show combines the talents of Jennifer Aniston, Reese Witherspoon, Steve Carell and Billy Crudup for a behind the scenes look at the rivalries of a network morning news show. At its best, The Morning Show recalls Network and the more recent Bombshell in the way it portrays broadcast politics, egos, and rivalries of TV news. The show starts strong with gritty ruminations on the media, #MeToo, dating in the workplace, gender roles and celebrity ego before it gets a bit too soapy for its own good. That said, Crudup is fantastic as a manic TV exec, and Aniston has never been better than in her role as an out-of-touch host. The Morning Show also features out actor Desean Terry as an out-gay co-anchor, though the show could have used more of his sincere presence. The Morning Show doesn’t qualify as a classic for the ages, but it sure does entertain.

The Requisite: Rudolph the Red-Nosed Reindeer

Is Rudolph the Red-Nosed Reindeer the gayest of all Christmas specials? We’re not sure…though we’re also not opposed to the idea. With Christmas just a week away, why not settle in for the perennial classic, complete with all it’s coded references to queer life. Rudolph and Hermie the elf both suffer persecution for being different. Yukon Cornelius looks like a guy we once met at a bear bar. We’re also pretty sure that we’ve seen the residents of the Island of Mistfit Toys out in the Castro. Beyond the queer subtext though, Rudolph offers unforgettable music, animation and heartwarming joy for the season. Grab an egg nog and enjoy. 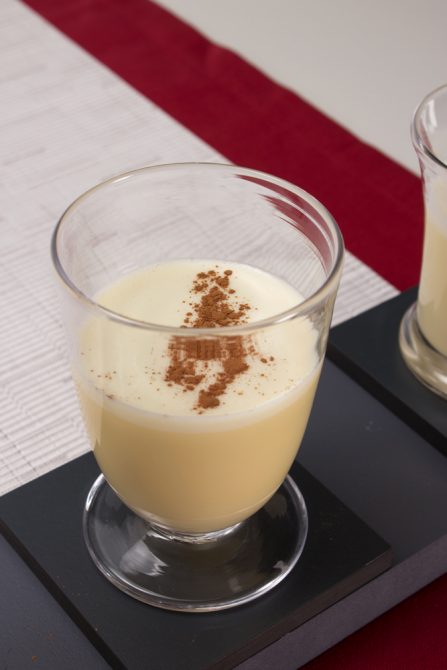 Speaking of egg nog, if ever there was a time to sip some…try the delicious if decadent holiday favorite whilst watching any of the aforementioned. With that in mind, one glass is probably enough. Don’t let what happened to grandma happen to you!