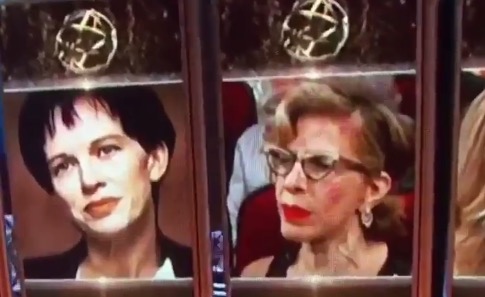 The Emmys were a predictable bore, with just enough charming/heartwarming moments (you get it Lena Waithe!) sprinkled throughout to keep us from changing the channel.

And while the following moment is certainly not heartwarming, it is absolutely charming in its own twisted way.

Jackie Hoffman did a hell of an acting job in Ryan Murphy‘s Feud, playing the memorable assistant (and often babysitter) of Joan Crawford (Jessica Lange), Mamacita.

Her performance landed her an Emmy award nomination for Best Supporting Actress in a Limited Series or Movie, which she lost out to Laura Dern’s incredible and terrifying portrayal of queen bee mom Renata in HBO’s Big Little Lies.

While the other nominees were no doubt disappointed they did not win, Hoffman opted out of the traditional smile-and-clap when your colleague wins, and went right for open disdain, tongue firmly planted in cheek, of course.

Watch below as she visibly mouths “Damn it!” a few times after Dern’s name is announced:

Best moment of the #Emmys so far: Jackie Hoffman yelling "dammit!!" when she lost to Laura Dern pic.twitter.com/euCWaRFsAy

If other performers started wearing their true feelings on their sleeves, award shows would be exponentially more watchable.

But Hoffman wasn’t quite done.

She then took to Twitter to throw some shade at Dern:

Laura Dern had famous parents. Forgive me for being from real people #elitism #Emmys2017

I hear that Laura Dern looted art from Nazi victims

Hoffman was clearly having fun with this “feud” by now, and must have been silently cackling as people took her seriously:

I hear the media actually taking my reaction seriously? Are you kidding me?

Stephen Colbert knelt by my chair like a knight and told me how happy he is for me and my work and Loved my reaction. Good night

When asked for comment, Laura Dern had this to say: