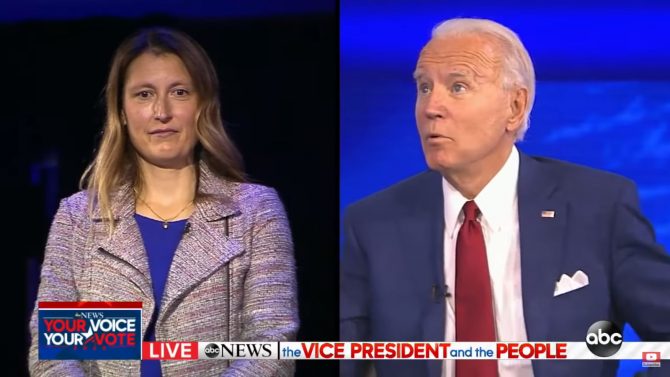 Democratic Presidential Candidate and former Vice President Joe Biden addressed the queer community during his town hall event last night, broadcast on ABC. While LGBTQ rights have not had the same amount of urgency in this campaign as other issues–healthcare, racial equality, and the COVID-19 pandemic have dominated the issues–Biden affirmed his commitment to support and protect the LGBTQ community as president.

One of the first mentions of queer people during this campaign came in the form of a question from Nathan Osburn, of Philadelphia, Pennsylvania. Osburn brought up concerns of an increasingly polarized Supreme Court, Mitch McConnell’s obstructionism in the Senate, which prevented Barack Obama from appointing new justices to the court, and the recent nomination of Amy Coney Barrett to succeed the late Ruth Bader Ginsberg. Osburn then asked Biden how he intended to protect LGBTQ people, even as Coney Barrett had expressed hostility toward questions addressing queer rights.

“I think there’s great reason to be concerned,” Biden lamented. “What the judge said was she didn’t answer very many questions at all. And I don’t even think she’s laid out much of a judicial philosophy, in terms of the basis upon which she thinks, are their unenumerated rights in the Constitution and — so, number one. So, I think there’s great reason to be concerned for the LGBT community, something I fought very hard for, for a long time, to make sure there’s equality across the board.”

LGBTQ people got a rare mention at Biden's town hall after being ignored for years at presidential debates.

We need more than this, and in particular, Trump and Pence need to have their record on our rights scrutinized. pic.twitter.com/7rjSLzNTEi

“My youngest daughter is transgender,” Haeck explained. “The Trump administration has attacked the rights of transgender people, banning them from military service, weakening non-discrimination protections and even removing the word transgender from some government websites. How will you as president reverse this dangerous and discriminatory agenda and insure that the lives and rights of LGBTQ people are protected under U.S. law?”

“I will flat out just change the law, Biden snapped. “Every — eliminate those executive orders, number one. You may recall I’m the guy who said — I was raised by a man who I remember I was being dropped off, my — my dad was a high school educated, well-read man who was a really decent guy.”

“And I was being dropped off to get an application in the center of our city; Wilmington, Delaware, the corporate capital of the world at the time,” Biden recalled. “And these two men, I’m getting out to get an application to be a lifeguard in the African American community because there was a big swimming pool complex. And these two men, well dressed, leaned up and hugged one another and kissed one another. And I’m getting out of the car at the light and I turn to my dad. My dad looked at me and said Joey, it’s simple. They love each other.”

“The idea that an 8-year-old child or a 10-year-old child decides, you know I decided I want to be transgender,” Biden continued. “That’s what I think I’d like to be. It would make my life a lot easier. There should be zero discrimination. And what’s happening is too many transgender women of color are being murdered. They’re being murdered. And I think it’s up now to 17, don’t hold me to that number. But it’s — it’s higher now?”

“And that’s just this year,” Biden continued. “And so I promise you there is no reason to suggest that there should be any right denied your daughter … that your other daughter has a right to be and do. None, zero. And by the way, my son Beau, passed away; he was the attorney general in the state of Delaware. He was the guy who got the first transgender passed in the state of Delaware and because of a young man who became a woman who worked for him in the attorney general offices.”

Biden’s record backs his words at the town hall meeting. In 2012, he became the first Vice President in US history to endorse marriage equality. Subsequently, he has spoken out against anti-queer purges in Chechnya, and fired off hot criticism at the Trump Administration for its erosion of LGBTQ rights, particularly regarding transgender rights.