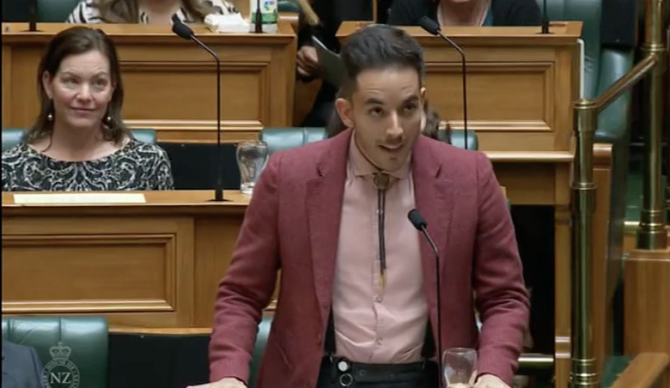 Some people really know how to make an entrance.

Freshman New Zealand Minister of Parliament Ricardo Menéndez March used his first speech to voice his commitment to fighting for the poor and underrepresented. He is one of 21 out gay lawmakers in the parliament out of only 120 seats.

One quote from the first generation Mexican immigrant’s remarks has resonated especially well with supporters.

“In our queer community there is a saying that I love,” he told his colleagues. “It goes ‘be gay, do crime.’”

As the laughter subsided, March explained the expression.

“To me it means to be transgressive, to acknowledge that decision makers have created rules that criminalize our survival and our existence,” he said, noting, “the rules were simply not made for us.”

He also spoke from his experience growing up in financial hardship, a reality shared by many immigrant families struggling to secure stable housing and a livable wage.

“We talk about increasing incomes and public housing for all because we know what it is like to count your dollars before the next paycheck,” he said.

And speaking to why he felt compelled to seek office, March explained it was politicians’ “dismissing the labor of low-waged workers as low-skilled and low-value that made me tune into local politics.”