Actress Gemma Arterton gives her best performance to date in this festival hit. Summerland follows the memories of a British lesbian writer named Alice who takes in a young ward during the World War II blitzkrieg. An unlikely bond develops between the pair, as she begins to share her life’s work with the young boy…and her memories of falling in love with another woman (Gugu Mbartha-Raw) during her own school days. Featuring beautiful seaside vistas and a committed performance by Arterton, Summerland conjurers memories of those Merchant-Ivory period films, both classy and moving.

The Moving: The Fight

This doc profiles the patriotic lawyers for the American Civil Liberties Union who hold steadfast against the tyrannical encroachments by the Trump administration. That’s especially true where LGBTQ protections are concerned, as said lawyers push back on everything from anti-trans bathroom bills to trans people serving openly in the military. Said attorneys also take on legal issues surrounding immigration, reproductive rights and voter suppression. With an election less than 100 days away, The Fight brooches an important subject, profiling some real American heroism. It also calls concerned citizens to action to vote a certain administration out of office. That’s good enough for us.

A reader tipped us off to this short-form series about two senior boyfriends seeking relationship counseling. Each episode finds the pair visiting a new counselor—each with an eccentric approach to treatment—and exasperating themselves and their therapist in the process. Each episode also features an end credits coda of the counselor discussing the trauma of treating the pair as well. As written & performed by series creators Mitch Hara and Jason Stuart, Smothered captures the misery and mystery of long-term coupling, and of couples aging together. It’s a very funny look at domesticity gone horribly–and hilariously–sideways.

The Glam: The Queens

Speaking of reader tips, another suggested this long-in-the-making doc about female impersonators is worth a watch. We have to agree. The Queens traces the history of Chicago’s famed The Baton, a cabaret that has played home to female impersonation for more than 50 years. The film also covers the popular Miss Continental Pageant, a sort of Miss America for the impersonator crowd (the queens in the film don’t care for the term “drag queen,” finding it too declasse). A number of famed impersonators also feature in the film, including Candis Cayne, Dominique Jackson, Mimi Marks, Naysha Lopez, Jasmine Masters and Tiffany Hunter. The film also examines the tension between self-identified impersonators and transgender queens, albeit in a problematic way: pageant owner Jim Flint says he wouldn’t allow transgender women to compete, even though high-profile trans performers like Cayne and Jackson appear in recent footage. That quibble aside though, we found ourselves as engaged by The Queens as we would be by any pageant film, and given Miss Continental’s important role in queer history, we think the movie worth a look.

The Jam: Kylie Minogue’s “Say Something”

Stop everything! Kylie Minogue just dropped a new track. “Say Something,” the first single of Minogue’s album Disco, due this November, finds the pop siren in top form. The video sees her vamping in her customary way amid her obligatory sparkles and glam. The lyrics, on the other hand, have special meaning in the time of COVID-19. “We’re a million miles apart in a thousand ways/Baby, you can light up the dark like a solar scape,” she croons…which feels all too appropriate to the current cultural moment. As such, the track makes for terrific dancing about the house music, clothing and a mirror optional, of course. “Can we all be as one again?” Kylie asks. Lady, we certainly hope so!

Speaking of dancefloor-ready tracks, former Spice Girl Mel C just dropped her latest single, a song off her forthcoming album Melanie C due out this October. “In and Out of Love” features a peppy beat and Mel’s full-throated vocals. Despite her numerous hits, she still doesn’t get enough credit as a pop vocalist. “In and Out of Love” only reinforces that sentiment, not to mention that it showcases her still-athletic form. It’s a fun song, ready-made for the living room dance party. 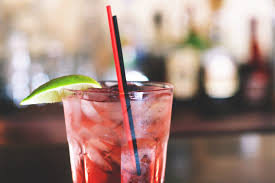 In honor of Ms. Cayne’s surprise appearance in The Queens–she won Miss Continental in 2001–we recommend this strong citrus cocktail so named for the woman herself. A hearty helping of Candis Cayne is always OK by us, so why not indulge.

Mix over ice. Serve with a lime wedge.