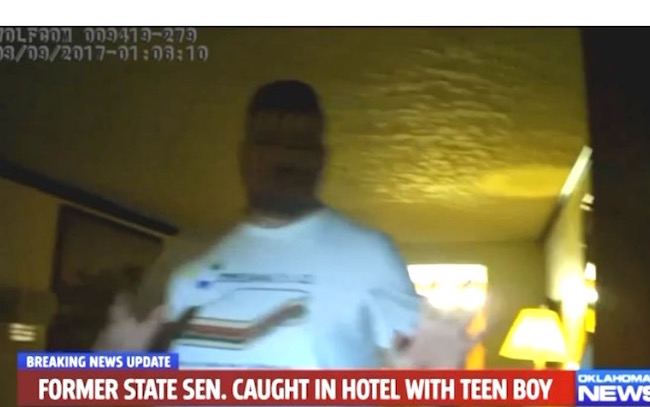 Police in Moore, Oklahoma have released bodycam footage of the skirmish that led 35-year-old Senator Ralph Shortey to be charged with child prostitution charges.

Shortey pleaded guilty to child sex trafficking charges in exchange for his child pornography charges to be dropped.

The former Republican state senator was charged in September, following an investigation that began in March and lasted several months — after the politician was discovered in a hotel room with a 17-year-old boy.

On March 9, authorities were called to a Super 8 Motel. Now, police have released bodycam footage from the officers who responded.

“So, what are they saying?” asks one officer.

“Well, drug related, maybe,” says another. “Maybe was coming here to buy some weed. Either here for narcotics, or prostitution for narcotics.”

Later in the vid, police are clearly trying to get the people from inside the room to come out:

“Hey, it’s Moore Police Department, man. We just need to check on your welfare, make sure you’re okay. We’re not going away… You said you’re getting dressed? You better hurry it up.”

Officers comment on the strong stench of marijuana inside the room.

The video cuts off once the teen comes out, and the door is closed again:

“What we are worried about is you having a juvenile in there,” says an officer. “Yeah, this one.”

As Shortey hides behind the door, an officer says, “Come out. Now, you’re getting me worried, show me your hands.”

Shortey is seen opening the door, wearing a T-shirt emblazoned with the Bible verse “Ephesians 5:22” and the words “Now go make me a sandwich.”

The bible verse alludes to women submitting to her husband as she does to God.

“I can’t,” an officer replies. “But, I can convince you that he is. I can put you in handcuffs and throw you in the back of car.”

“So, what was going on over here tonight, man?” an officer asks.

“We were just hanging out,” Shortey answers. “Talking about life and stuff we’ve been talking for a few months about. Tomorrow, he told me he was going to get his GED. Couldn’t graduate high school and was trying to get his life on track.”

Though Shortey wasn’t arrested that morning, the incident inspired an investigation that eventually led to his child prostitution charge and subsequent resignation from Oklahoma State Senate.

“What sense does it make, me lying to you?” an officers says in the footage. “But, listen, whatever you’re doing, it’s a bad [expletive] idea. Does that make sense to you? Getting high, with a young kid, is a bad idea. No matter if they’re 17 or 20. It’s a bad idea. You understand what I’m saying?”