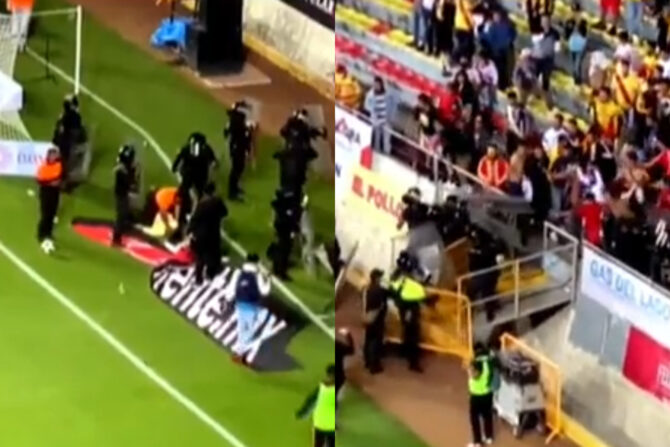 Football fans in Michoacán, Mexico, got an unexpected match while attending a game on December 4. Violence erupted in the stands after a referee halted the game due to fans shouting a homophobic slur at players.

The game in question was the Liga de Expansión MX quarter-finals match between Club Atlético Morelia and Tampico Madero Fútbol Club. In a fraught final quarter, fans began chanting the word “p*to” from the stands. In English, the word roughly translates as “f*ggot.” Football fans have a long history of chanting the word during games reports Mexico News Daily–something the Mexico Soccer Federation has sought to end.

As such, federation rules state that a referee must pause a match until the crowd stops chanting the word. A referee on December 4 did just that, sending players back to their locker rooms.

At that point, fans turned surly. They began hurling objects at the referee on the field, prompting officials to suspend the game. They also declared Tampico Madero F.C. winner of the match, thus eliminating Club Atlético Morelia from the quarter-finals.

That’s when the crowd turned violent. Fans continued to throw objects onto the field, while others broke out into fistfights in the stands. With arena security unable to contain the mob, police were called to the scene. Video  shows officers in riot gear struggling to hold back the mob in the stands. It has since gone viral on social media.

As a result of the riot, the disciplinary committee of the Mexican Football Federation placed sanctions on Club Atlético Morelia. The club will pay a fine as a result, and miss the next three matches of the league.

“The homophobic chant is unacceptable in our soccer [league] and the rules and sanctions will be applied in full,” the committee said in a statement.

The riot at the Liga de Expansión MX quarter-finals is just the latest incident of league referees clashing with fans in the stands yelling homophobic slurs. In September, a similar riot broke out in Mexico City as refs halted the match due to the crowd yelling “p*to.” In June, fans were banned from attending World Cup Qualifying matches after Mexican spectators refused to stop chanting the word.