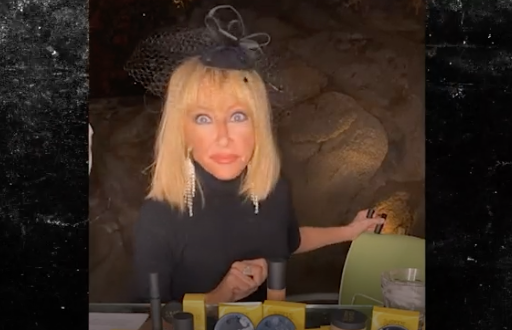 It was just another night in Palm Springs selling makeup in the backyard when suddenly a “nearly naked” intruder broke in claiming to be evading ghosts and offered a gift. We’ve all been there.

Though it sounds like the result of a round of Mad Libs, that’s the predicament Three’s Company alum Suzanne Somers found herself in recently.

Somers, 74, was in the middle of doing a Facebook Live makeup tutorial with her husband, Alan Hamal, when the uninvited guest appeared.

Lipstick in hand, Somers asks, “Is somebody there? I just heard a person.”

The reportedly “nearly naked” intruder, who would later identify himself as Aaron Carpenter, then says off camera: “I’m here. Hi. Sorry, I was just slightly terrified over there for a second.”

Somers is startled but remains calm, conversing with Carpenter and asking how he got there.

“There were ghosts following me,” he says, adding, “a friend let me up this hill and then I came down.” Well that clears things up!

Throughout the exchange, Somers finds a few moments to address her Facebook Live audience with some wide-eyed facial expressions.

After being told to exit the property the way he came in, Carpenter announces he has a gift for Somers, who politely declines.

“I don’t want anything,” Somers says. “You seem like a very nice person. But you shouldn’t be here.”

Appearing mostly unfazed, Somers then returns to her livestream to wrap things up, saying she was planning to call the police. It’s unclear whether she actually made the call.

Somers’ stint selling makeup on the web comes after she joked her “career is over!” because of her outspoken support of former President Donald Trump.