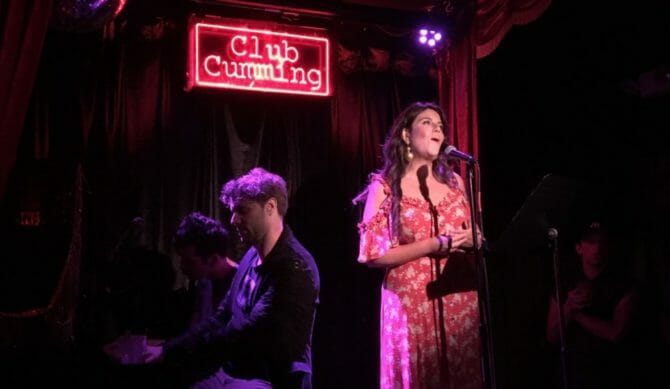 When I went out last night to sing some Amy Winehouse songs on the seventh anniversary of her death, I didn’t realize I would be seeing perhaps one of the most famous faces from my childhood. Growing up in the ’90s, Monica Lewinsky’s story was a big part of my adolescence. My own coming to terms with sex and sexuality was happening at the same time her own sex life and sexuality were being exploited by the world. Now in the #MeToo era, we finally reflect on the way we treated her as a society.

When I first saw her in the back, I clocked Lewinsky right away but realized no one else had really noticed. Then Lance Horne, the night’s host who packs in the small bar with his weekly open mic night, announced her from the stage. He asked the crowd to sing her, “Happy Birthday.” OK. Now I’m singing Monica Lewinsky, “Happy Birthday.” Is this real life? Or is this fantasy?

This isn’t the first celebrity sighting at Club Cumming that has felt magical. Last summer, I met Emma Stone, Billie Jean King, and Paul McCartney when they stopped by the East Village haunt for some songs at the piano and a few dances on the floor. Then, just last month, Vanessa Williams popped in to perform as well. She belted her version of “Colors of the Wind,” and ended with her “Save the Best for Last” single. Only in New York City can you show up at a bar to sing some Disney only to be serenaded by Vanessa Williams singing that same Disney song.

The room was packed with gay men, who like me, probably grew up hearing stories of oral sex, scandal, blue dresses, denial, and impeachment. Those headlines or that fodder didn’t matter. What mattered is that a girl came out to celebrate her birthday in a bar, and she gave the gays what they wanted: a Judy Garland ballad wrapped up in lots of metaphor.

These are the nights that make New York so magical.