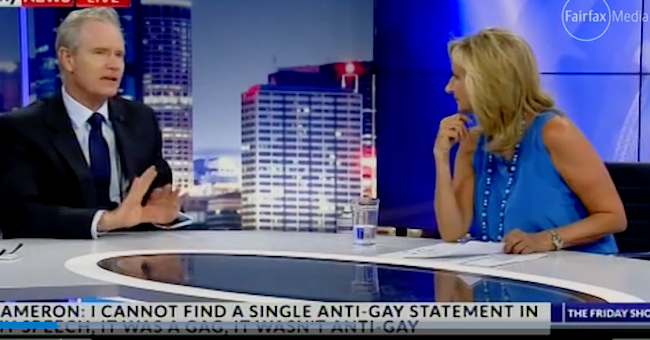 Ross Cameron is a conservative former Australian MP for Parramatta who earned a slew of dubious headlines this week after a homophobic speech he gave to Sydney’s right-wing Q Society surfaced.

He’s also currently employed by Sky as the host of a political show, and he found himself at the mercy of a colleague who wasn’t willing to let him off the hook about the speech.

Related: News Anchor Jokes About All The Women Steve Grand Dates, But The Joke’s On Her

Not that the speech is defensible in any way. In it, he referred to the Sydney Morning Herald newspaper as the “Sydney Morning Homosexual” and then claims the Liberal Party is “basically a gay club.”

“I don’t mind that they are gay,” he adds. “I just wish, like Hadrian, they would build a wall. ”

To give a sense of exactly what kind of event this was, a ring-wing cartoonist made the following “joke”:

“I can’t stand Muslims… [but] they are not all bad, they do chuck pillow-biters off buildings.”

That’s why his colleague, television host Janine Perrett, went after him on live television.

After prodding Cameron to explain his speech, he said, “I gave a very pro-gay speech in which I said that gays have been associated with the creative class since the beginning of history.”

Related: “Girl, He Hit The Pole” Is The Best News Interview You’ll See Today — Or Ever!

“But it was derogatory,” Perrett said. “Wasn’t it? You weren’t giving them a good rap.”

“I’ll accept it was a gag but I don’t regard it as anti-gay,” Cameron responded. “I would say that I didn’t make a single, if you go through my remarks, I don’t see a single sentence of my remarks that is critical of gays.”

“What I object to is the Sydney Morning Herald taking the view that the vast sweep of Australians are homophobic, racist, rednecks.”

When Perrett asked whether he’ll issue an apology, Cameron said the media took his remarks “out of context.”

Then he added, “If the reporting of these comments has caused someone to feel a greater sense of isolation over their attraction, then I very sincerely apologize.”

“That was the worst apology I have ever heard,” Perrett shot back. “So if they weren’t reported, then you wouldn’t apologize?”

“I don’t accept… if you read my speech, it was in defense of dissent,” Cameron said.

“You knew this was going to come out publicly,” Perrett said. “You can’t just use the Donald Trump ‘locker room talk’ defense.”

“I regard that as one of the strengths of the argument,” Cameron said.