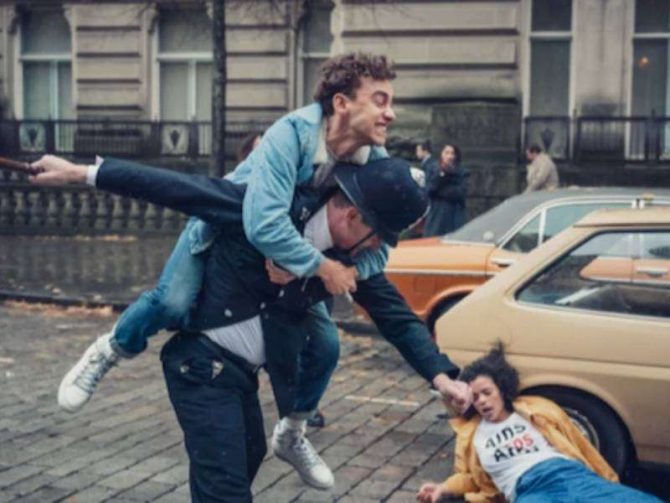 Russell T. Davies has our attention.

That should come as no surprise to anyone with knowledge of his upcoming new series, It’s a Sin. The series chronicles the early days of the AIDS crisis in Britain, and stars actor Olly Alexander, best known as the lead singer of the band Years & Years.

In It’s a Sin, Alexander plays Ritchie Tozer, a gay teenager who moves to London in 1981. There, he basks in the glory of post-Stonewall gay life as rumors of “gay cancer” begin to circulate among the populace.

A new clip, posted to Twitter January 5 by Alexander himself, offers a bit of insight into his character. In it, Ritchie dismisses concern over AIDS, chalking it up to a conspiracy by drug companies.

“Do you know what it really is, AIDS? It’s a racket,” he says. “It’s a money-making scheme for drug companies. Do you seriously think there’s an illness that only kills gay men? That can calculate that you’re gay and kill you, but no one else? Hmm. What about bisexuals? Do they only get sick every other day?”

“They say it’s a cancer,” he continues, “but you can’t catch cancer, can you? Cancer is not a thing that can get caught! It’s not like a cold or a cough it’s cancer! It doesn’t transmit. Imagine it, ‘gay cancer’. How is a cancer gay?”

“They say it affects homosexuals, Haitians and hemophiliacs,” Ritchie continues, “like there’s a disease that targets the letter ‘H’. Who’s it going to get next? People from Hartlepool and Hampshire and Hull? Don’t you see what all of these things have got in common? They’re not true. And how do I know, how do I know it’s not true? Because I’m not stupid. Which means I don’t believe it.”

The character’s attitude was not at all unusual in 1981. LGBTQ people had won hard-earned freedoms and visibility. Right-wing and conservative voices on both sides of the Atlantic continued to spread lies and misinformation about queer people; suspecting that those same forces would concoct a fictional disease unlike any the world had ever faced didn’t seem that far-fetched in the context of history.

It’s a Sin stars Alexander along with Omari Douglas, Callum Scott Howells, Neil Patrick Harris and Stephen Fry. The series premieres in the UK on Channel 4 this January, with an American debut on HBO Max later this year.